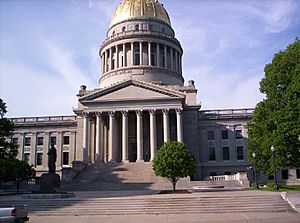 The capital and seat of government in West Virginia is the city of Charleston, located in the southwest area of the state.

The chief executive of West Virginia is the governor of West Virginia, who is elected to a four-year term at the same time as presidential elections. The governor is sworn in the January following the November election. A governor may only serve two consecutive terms. A governor may run for a third term, but an interceding election must occur. Democrat Earl Ray Tomblin was elected governor in 2011, in a special election to replace Governor Joe Manchin, who resigned as governor when he was elected in a separate special election to fill the United States Senate seat of the late Robert Byrd.

In addition to the governor, there are five other directly elected executive offices:

Regular elections are held concurrently with the election for governor every four years, but unlike the governor these offices have no term limits.

From the 1930s through the 1990s, West Virginia's politics were largely dominated by the Democratic Party, and Democrats still dominate most local and state offices. West Virginia also has a very strong tradition of trade union membership.

The most consistent support for Democrats is found in the coal fields of southern West Virginia (especially McDowell, Mingo, Logan, Wyoming, and Boone counties), while Republicans find greatest success to the east of the Allegheny Mountains, especially in the state's Eastern Panhandle, and in the suburbs near Charleston and Huntington.

All content from Kiddle encyclopedia articles (including the article images and facts) can be freely used under Attribution-ShareAlike license, unless stated otherwise. Cite this article:
Government of West Virginia Facts for Kids. Kiddle Encyclopedia.