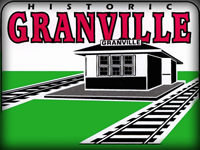 Granville was a town located in Milwaukee County, Wisconsin, United States. One portion was incorporated as the village of Brown Deer in 1955; the remainder consolidated with the City of Milwaukee in 1956, and became a neighborhood of Milwaukee.

The area around Good Hope Road and 43rd Street was known as East Granville, and was home to the East Granville Cemetery which was started in the 1840s. The cemetery was moved by Brown Deer in 1969 to widen existing roads.

Separation, annexation, and consolidation with Milwaukee

The northeastern corner of the town was known as Brown Deer, and eventually became the incorporated Village of Brown Deer on January 20, 1955, after a court battle between area residents and the city of Milwaukee (which hoped to annex the area). The remainder was consolidated with the City of Milwaukee after referenda held in both jurisdictions on April 3, 1956 approved the move.

However, on July 12, 1956, the Town Board of Granville passed a motion to repeal the ordinance under which the April referendum had been held, and the matter ended up in the hands of the Wisconsin Supreme Court, which finally ruled that the consolidation had been lawfully approved and the Town of Granville had ceased to exist.

The final details of which portions were to go to Milwaukee and which to Brown Deer were not finally put to rest until April 1962, with one parcel of a quarter of a square miles going to Brown Deer.

All content from Kiddle encyclopedia articles (including the article images and facts) can be freely used under Attribution-ShareAlike license, unless stated otherwise. Cite this article:
Granville, Milwaukee Facts for Kids. Kiddle Encyclopedia.