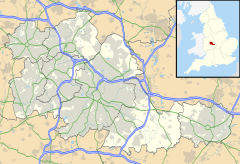 Gravelly Hill Interchange, also known as Spaghetti Junction, is a famous junction in the UK. It is junction 6 of the M6 motorway where it meets the A38(M) Aston Expressway in the Gravelly Hill area of Birmingham, England. The interchange was opened on 24 May 1972.

The interchange's colloquial name "Spaghetti Junction" was coined in 1965 by journalists from the Birmingham Evening Mail. On 1 June 1965, reporter Roy Smith described plans for the then unbuilt junction as a "cross between a plate of spaghetti and an unsuccessful attempt at a Staffordshire knot", and a sub-editor headlined the article "Spaghetti Junction". 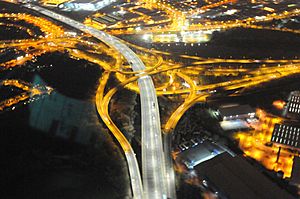 The interchange at night seen from the West Midlands Police helicopter

In 1958, the Ministry of Transport commissioned the engineering firm, Sir Owen Williams & Partners, to investigate possible routes to connect the M6, the A38(M) and the A38 trunk road.

The development of the interchange was approved and announced in August 1968 by the then Minister of Transport, Richard Marsh. Construction was expected to take three years and to cost £8m.

Construction started in 1968 and the junction was opened in May 1972 by the then Secretary of State for the Environment, Peter Walker. The opening was delayed by several months because of "box girder inspections". These followed the interim report of the Merrison Enquiry set up following the collapse of similar box girder bridges in Australia and Wales. In an unusual meeting of old and new transport technology, the pillars supporting the flyovers over the Birmingham Canal Navigations had to be carefully placed to enable a horse-drawn canal boat to pass under the interchange without fouling the towing rope. The junction has undergone major repair work several times since, owing to the very heavy traffic through the junction, and some alleged cost-saving measures during its construction. In November 2007, a sliproad running from the Tyburn Road onto the Aston Expressway was closed to undergo urgent repair works. Upon inspection, it was found that Spaghetti Junction itself was in need of repair work because salt and grit had weakened the joints in the structure.

The student magazine of Birmingham City University, Spaghetti Junction, takes its name from the interchange's nickname. 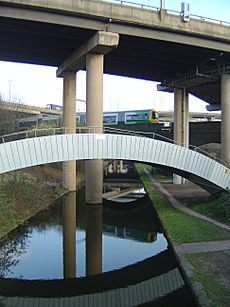 Underneath the motorway junction are the meeting points of local roads, the river Tame's confluences with the River Rea and Hockley Brook, electricity lines, gas pipelines, the Cross-City and Walsall railway lines and Salford Junction, where the Grand Union Canal, Birmingham and Fazeley Canal and Tame Valley Canal meet.

All content from Kiddle encyclopedia articles (including the article images and facts) can be freely used under Attribution-ShareAlike license, unless stated otherwise. Cite this article:
Gravelly Hill Interchange Facts for Kids. Kiddle Encyclopedia.