The gray-banded kingsnake (Lampropeltis alterna), sometimes referred to as the alterna or the Davis Mountain king snake, is a species of nonvenomous snake in the family Colubridae. The species is endemic to the southwestern United States and adjacent Mexico. Some sources list two distinct subspecies of Lampropeltis alterna, as L. a. alterna and L. a. blairi differentiated by patterning and locale, but research has shown them to be color morphs of the same species. 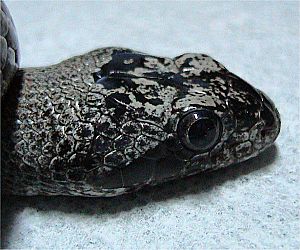 A moderately sized snake, the gray-banded kingsnake can grow up to 4 ft (120 cm) in total length (including tail), with the average total length being 3 ft (91 cm). It has a relatively wide head (when compared to other kingsnake species), and has large eyes with round pupils.

L. alterna coloration and patterning vary greatly, but there are two main color morphs, which were once considered separate subspecies: the "blairi" which has wide red/orange banding, and the "alterna" which has thinner orange/red banding. Both are generally on a gray background with white and/or black accenting. There are many variations on this basic morphology found in the wild and captive bred, with some specimens even lacking orange or red banding entirely.

In the wild, the gray-banded kingsnake, is not often encountered. It is a common species, but nocturnal and quite secretive. Its natural range is sparsely populated with humans, and many regions are virtually impassable due to the mountainous terrain. In the field herpetologist community, finding this snake in the wild is often considered to be a laudable feat. Most that are located are found along the roadways that transect their habitat in the Trans Pecos region. L. alterna generally has a calm disposition and is not prone to defensive reactions, like biting. They are non venomous and have an immunity to rattlesnake venom.

The gray-banded kingsnake feeds primarily on lizards. It will occasionally feed on small rodents, frogs, and the eggs of ground nesting birds, lizards, and other snakes. 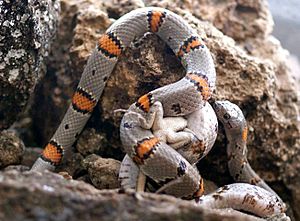 L. alterna is oviparous, laying clutches of 3–13 eggs in early summer, which hatch in approximately 9 weeks. Each hatchling is around 10 in (25 cm) in total length. 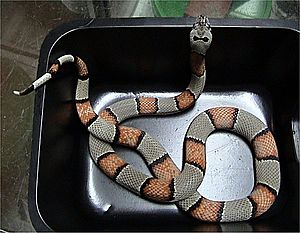 Gray-banded kingsnakes are commonly kept in captivity and are fairly easy to come by in the exotic pet trade. Due to their relatively small size, calm dispositions, and astounding array of pattern variations they are frequently captive bred. Many alterna breeders are strict about keeping locality bloodlines pure, and will only breed snakes from the same region, though as market demand decreases, this is becoming less and less important to some breeders. Cross breeding with other species of kingsnake, like the Neuvo León kingsnake, Lampropeltis leonis is fairly common as well.

All content from Kiddle encyclopedia articles (including the article images and facts) can be freely used under Attribution-ShareAlike license, unless stated otherwise. Cite this article:
Gray-banded kingsnake Facts for Kids. Kiddle Encyclopedia.