The Church was designed by James Sellars and built in 1877 as the Belhaven Church for the United Presbyterian Church of Scotland. The church was built in Norman Gothic style, inspired by Dunblane Cathedral. The congregation became part of the Church of Scotland in 1929 and continued to meet there until 1960.

A prominent feature of the church is the stain glass windows designed by Stephen Adam which depict scenes from the Old and New Testament.

Following the amalgamation of Behaven Church with a neighbouring congregation, the Belhaven Church building was no longer needed by the Church of Scotland. It was converted to a Greek Orthodox Church; the work was paid for by Sir Reo Stakis. Stakis had also paid for the first (much smaller) Greek Orthodox church in the city, in 1953. 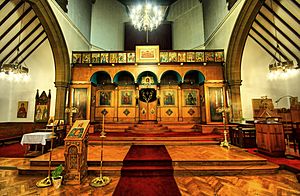 On 24 May 1970 the Patriarch Nicholas VI of Alexandria, who was attending the General Assembly of the Church of Scotland, visited St. Luke's and elevated it to the status of a Cathedral, with the blessing of the Ecumenical Patriarchate of Constantinople. This occasion is commemorated with a marble plaque, inscribed with gold lettering, at the right side of the entrance hall.

On Sunday 7 July 1996 the Cathedral was visited by the Ecumenical Patriarch Bartholomew I of Constantinople, who celebrated the Divine Liturgy.

The other cathedrals in Glasgow are St. Andrew's Cathedral (Roman Catholic) and St. Mary's Cathedral (Episcopalian). Glasgow Cathedral (Church of Scotland) is also in Glasgow, but it is not a Cathedral Church, as it is no longer the seat of a bishop.

All content from Kiddle encyclopedia articles (including the article images and facts) can be freely used under Attribution-ShareAlike license, unless stated otherwise. Cite this article:
Greek Orthodox Cathedral of St. Luke, Glasgow Facts for Kids. Kiddle Encyclopedia.