Greeley is a rural, heavily wooded section of Pike County, with no central town square. It is mostly established summer camp grounds and state game lands. Camp Shohola, Pine Forest Camp, Lake Greeley Camp, Camp Timber Tops, and Lake Owego Camp are popular summer camps for children and teens throughout the tri-state area. Camp Lee Mar, a camp in Greeley for children and young adults with special needs, has been in operation for over 60 years.

The town is actually under the administrative control of the municipality of nearby Lackawaxen, Pennsylvania, which lies at the convergence of the Delaware and Lackawaxen rivers within the Upper Delaware Scenic and Recreational River. Prolific western author Zane Grey began his writing career in Lackawaxen, relating stories of his experiences along the Upper Delaware River.

Greeley is named for Horace Greeley (February 3, 1811 – November 29, 1872) an American newspaper editor and a founder of the Liberal Republican Party. The New York Tribune (which he founded and edited) was the US's most influential newspaper from the 1840s to the 1870s. 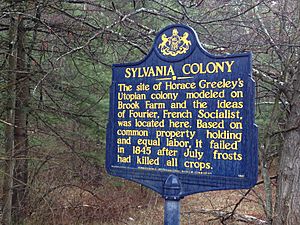 Horace Greeley had supported a rural commune known as the Sylvania Association, then located within the township's current boundaries. The commune, for which Horace Greeley served as Treasurer, had attempted to structure itself in accordance with the radical ideas of Albert Brisbane, who briefly studied Charles Fourier and Karl Marx.

The association purchased 3200 acres from Mahlon Godley Sr. in 1842. They subsequently built a small saw mill, two small two story houses, and a small barn. Only the foundation of the mill remains with some of the walls exceeding twenty feet in height. The old mill wall still stands alongside a stream that still flows through the township. It can still be seen near a historical state marker along what is now the junction of Routes 434 and 590. The association eventually failed because the members, unaccustomed to wilderness, failed to plant and harvest sufficient crops in 1845.

Although Greeley remains a mostly rural, mountainous location between the somewhat more cosmopolitan towns of Hawley and Milford, Greeley attracts second home owners drawn to its scenic beauty and quiet lifestyle. Route 590, which runs through the town, is a popular route for motorcycle enthusiasts on their way from nearby Lake Wallenpaupack to the Delaware River, which lies just three miles down the road.

All content from Kiddle encyclopedia articles (including the article images and facts) can be freely used under Attribution-ShareAlike license, unless stated otherwise. Cite this article:
Greeley, Pennsylvania Facts for Kids. Kiddle Encyclopedia.