This article is about the basic notions. For advanced topics, see Group theory. 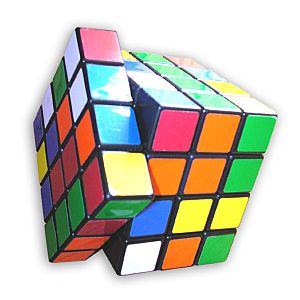 A Rubik's Revenge cube. All the possible positions of the cube, if paired with a suitable operation, would form a group.

In mathematics, a group is a kind of algebraic structure. A group has a set and an operation. The group's operation can combine any two elements of the group's set. This forms a third element.

Mathematicians use capital letters to stand for groups. They often use G, H, or K.

They use lower-case letters to stand for group elements. To save words, they say "a is in G" to mean "a is an element of G".

They write group operations with symbols like • or *, or by writing two elements next to each other. So "a • b", "a * b", and "ab" can all mean "the element formed when the group's operation combines a and b".

For some groups, however, a • b = b • a for every a and b in the group. These special groups have a special name. They are called Abelian groups and their operation is said to be commutative.

The number of elements in a group is called the group's order.

One everyday example of a group is the set of integers, the addition operation, zero (the identity). It is easy to see that when you add two integers, the result is always an integer. So closure is true. The identity element for this group is zero. Because the order of additions does not matter (or in other words,

), associativity is true. And the inverse of any integer is its negative value. This group is also an abelian group. It is an infinite group (also called a group of infinite order) because it has an infinite number of elements, the integers.

The set of integers with the multiplication operation is not a group because there is no integer which is the inverse to multiplication.

Another important example of a group is a group of symmetries.

Each symmetry of an object is an element of the group.

The identity element is the symmetry in which nothing changes.

Any symmetric change can be undone by reversing the change. That reverse is the inverse element.

Symmetry groups provide many examples of groups. For example, here are all of the symmetries of a square: turn the square clockwise 90o, 180o, or 270o; turn the square counter-clockwise 90o, 180o, or 270o; reflect the image of the square in a vertical mirror, or in a horizontal mirror, or a diagonal mirror to the right or the left; or leave the square unchanged. This is a finite group (or a group of finite order). It is a non-abelian group because it can make a difference which order when making a turn and a reflection.

It can be proved that every group of finite order is a group of symmetries. For this reason, group theory is called the mathematical study of symmetry.

Many things in mathematics are groups. For example, equations. The ways of solving equations can be a group. Physical things can be studied as groups. There are important symmetries about physical things which are groups.

Sometimes part of the group is also a group. In that case, the part is called a subgroup. For example, there is this subgroup of the group of symmetries of a square: only the turns of the square and the identity (not the reflections in a mirror). Many useful things can be proved about groups and their subgroups.

All content from Kiddle encyclopedia articles (including the article images and facts) can be freely used under Attribution-ShareAlike license, unless stated otherwise. Cite this article:
Group (mathematics) Facts for Kids. Kiddle Encyclopedia.