The Gulf, Mobile and Ohio (reporting mark GMO) was a Class I railroad in the central United States whose primary routes extended from Mobile, Alabama, and New Orleans, Louisiana, to St. Louis and Kansas City, Missouri, as well as Chicago, Illinois.

From its two parallel lines through eastern Mississippi, the GM&O also served Montgomery and Birmingham, Alabama, as well as Memphis, Tennessee. 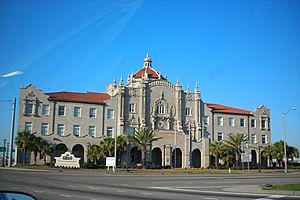 The Gulf, Mobile and Ohio terminal in Mobile, Alabama.

From 1952 to 1972 the headquarters of the GM&O were in Mobile, Alabama at 104 St. Francis Street. The President of the GM&O Railroad during this period was G. Paul Brock. The Railroad retained the passenger terminal at Beauregard Street for additional offices.

The GM&O Railroad was the first "large" railroad in the United States to replace all its steam locomotives with diesels.

On February 11, 1998 the Illinois Central was purchased by the Canadian National Railway (CN) with the integration of operations beginning on July 1, 1999. 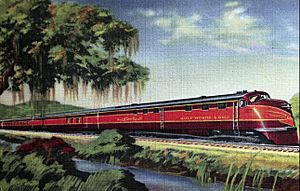 Postcard c. 1940 depicting one of the Rebel streamliners 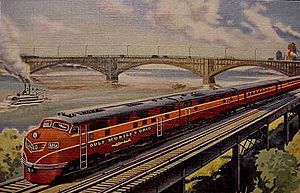 Streamliner circa 1940s between Chicago and St. Louis.

In addition to the GM&O's most popular train, the streamlined Rebel (New Orleans - Jackson, Tennessee 1935-1941; extended to St. Louis thereafter), the railroad also operated a number of other named trains. These include:

A GM&O EMD E7 and passenger cars were featured in the 1967 film In the Heat of the Night. Although the film's opening and ending shots of the GM&O are implied to be in a fictionalized version of Sparta, Mississippi, GM&O had ceased all passenger service south of St. Louis, Missouri eight years before filming was done in 1966. The actual filming location was Sparta, Illinois. The location where the GM&O locomotives and cars were filmed was in Sparta Illinois also. The train was leased from GM&O with a train crew to comply with union and operating rules of the road. The train came from Metro St. Louis, Missouri and traveled south along a GM&O right of way towards Sparta Illinois. At the time of filming, GM&O had not merged yet with the Illinois Central Railroad. The opening scene of the film shows the train crossing a main street in Sparta at night with the bright headlamp on the lead engine approaching town from an overhead shot. This was done using a scaffold across the tracks. This scene shows Virgil detraining and entering the depot station. The train was then driven south to an available turntable and parked for the night turning the engines around for the return trip to Sparta to shoot the final scene which was shot the following day and was among the final scenes of the film showing Virgil boarding the train and saying goodbye to Gillespie. As the train leaves Sparta, a close up shot of Virgil riding in a passenger car was taken by helicopter as the train travels the opposite direction with the scene expanding the view showing it meandering through the countryside as it leaves Sparta.

In popular music, the GM&O line is referenced in Adrian Belew's "The Rail Song," a nostalgic song about the heyday and subsequent decline of the American railroads. Originally on 1983's Twang Bar King album, the song can also be found on the Desire of the Rhino King compilation and in an acoustic version on both The Acoustic Adrian Belew and the Salad Days compilation.

The album cover of the 1989 Traveling Wilburys song End of the Line features an upside down photograph of the Ann Rutledge at Lincoln, Illinois in 1953.

All content from Kiddle encyclopedia articles (including the article images and facts) can be freely used under Attribution-ShareAlike license, unless stated otherwise. Cite this article:
Gulf, Mobile and Ohio Railroad Facts for Kids. Kiddle Encyclopedia.