Madison is a city in Madison County, Mississippi, United States. The population was 24,841 at the 2010 census. The population is currently over 25,000. It is part of the Jackson Metropolitan Statistical Area.

The city of Madison, named for James Madison, the fourth President of the United States, developed along a bustling railroad track in antebellum Mississippi. It began in 1856 when the Illinois Central Railroad opened Madison Station, the forerunner of the city of Madison.

The nearby town of Madisonville was a settlement along the stagecoach route on the Natchez Trace. It was the first county seat of Madison County in 1828, and had a race track, two banks, a wagon factory, and at least one hotel. Its residents gradually moved to the new railroad community, and old Madisonville became defunct.

Like many railroad towns in the South, Madison Station was heavily damaged by the Union Army during the Civil War. Ten miles from the state capital of Jackson, Madison Station was largely destroyed in 1863 after the July 18–22 siege of Jackson. No battles were fought in Madison County, but Major General Stephen D. Lee concentrated his command in Madison Station during the month of February 1864. Stephen Lee was later appointed as the first president of Mississippi State College (now Mississippi State University).

The railroad continued to attract growth after the Civil War. In 1897, the Madison Land Company encouraged northerners to "Go South, and grow up with the country." Located in Chicago, the land company’s interest in development prompted Madison to incorporate as a village, though the charter was lost when regular elections were not held because of the failure of the "land boom".

The Madison Land Company offered prime land for as little as $3.00 an acre. It claimed that Mississippi had the lowest debt ratio in the United States at $19.00 per capita and that Mississippians were one-third healthier by "official figures" than people in New York and Massachusetts. The figures were quoted in the Madison Land Company's brochure by Bishop Hugh Miller Thompson, the second Episcopal Bishop of the Diocese of Mississippi and a Madison resident, who originally came from Wisconsin.

After many years of court battles, the city annexed other territory to expand its limits in size in the late 2000s. 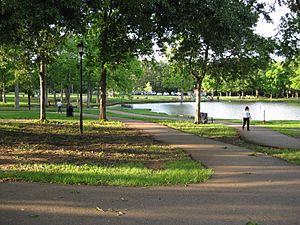 There is one small airport in the city, Bruce Campbell Field.

Madison officials first explored the possibility of creating a sister city relationship with Sollefteå, Sweden in 1995. Madison County economic development representatives had met with executives representing the Sollefteå-based forestry products company, Haglof, Inc. The latter were investigating opening a plant in Madison. They were interested to learn of local residents of Swedish descent; names such as Lindquist are common in the Greater Madison area.

Talks began, and a January 1997 video conference call between the two cities facilitated the meeting. Five months later, a delegation of over 30 members arrived in Madison to tour the city and to ratify the sister city relationship. During that visit, Haglöf, Inc. opened its new office and the Swedish company Mini Tube also announced plans to locate a facility in Madison.

A 34-member delegation from Madison flew to Sweden in May 1997 for a five-day tour of Sollefteå. They learned about the Swedish city's economic development efforts, cultural facilities, innovations in education, and ability to attract visitors and businesses to the area. The delegation toured industrial sites, such as Haglöf Inc.’s facilities, an energy plant, and a communications company. They also visited a forestry school and environmental center.

The Swedish-American Chamber of Commerce South Central U.S. was founded in 1997 as a result of this trade relationship. It serves Mississippi, Alabama, Arkansas, Louisiana and Tennessee.

The City of Madison is served by the Madison County School District. The Student/TeacherRatio is 19:1.

Madison-Ridgeland Academy is a 6A private high school and member of the MSAIS located in Madison.

St. Joseph Catholic School is a parochial school located in Madison that serves the Jackson Area; it is of the Roman Catholic Diocese of Jackson.

All content from Kiddle encyclopedia articles (including the article images and facts) can be freely used under Attribution-ShareAlike license, unless stated otherwise. Cite this article:
Madison, Mississippi Facts for Kids. Kiddle Encyclopedia.