Gulf of Boothia facts for kids

Kids Encyclopedia Facts
Not to be confused with the Gulf of Bothnia. 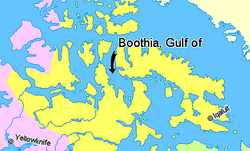 The Gulf of Boothia is a body of water in Nunavut, Canada. Administratively it is divided between the Kitikmeot Region on the west and the Qikiqtaaluk Region on the east. It merges north into Prince Regent Inlet, the two forming a single bay with different names for its parts. It is surrounded by, clockwise, Baffin Island, Fury and Hecla Strait, the Melville Peninsula, the Canadian mainland, the Boothia Peninsula and perhaps Bellot Strait if the Gulf can be said to extend that far north. The south end is Committee Bay, northwest of which are the Simpson Peninsula and Pelly Bay. In addition to its connection to Prince Regent Inlet one can use an icebreaker to go east through the Fury and Hecla Strait, or, with luck, pass the Bellot Strait westward.

In 1822, it was seen by some of William Edward Parry's men, who went on foot along the ice-choked Fury and Hecla Strait. In 1829, it was entered by John Ross, who was frozen in for four years and named it for his patron Sir Felix Booth. Its south end was explored by John Rae in 1846–1847, who reached it overland from the south.

All content from Kiddle encyclopedia articles (including the article images and facts) can be freely used under Attribution-ShareAlike license, unless stated otherwise. Cite this article:
Gulf of Boothia Facts for Kids. Kiddle Encyclopedia.