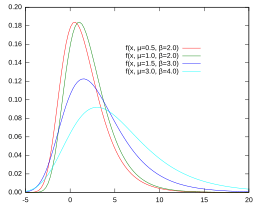 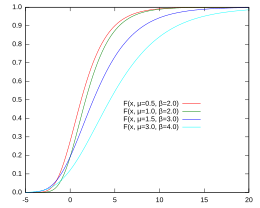 In probability theory and statistics, the Gumbel distribution is used to model the distribution of the maximum (or the minimum) of a number of samples of various distributions.

Such a distribution might be used to represent the distribution of the maximum level of a river in a particular year if there was a list of maximum values for the past ten years. It is also useful in predicting the chance that an extreme earthquake, flood or other natural disaster will occur.

In the PDF, the probability P of a value V to occur between limits A and B, briefly written as P(A<V<B), is found by the area under the PDF curve between A and B.

Contrary to the normal distribution, the Gumbel PDF is a-symmetrical and skew to the right.

In the CDF, the probability that a value V is less than A is found directly as the CDF value at A: 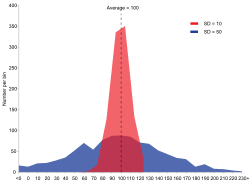 The mathematical expression of the CDF is:

where μ is the mode (the value where the probability density function reaches its peak), e is a mathematical constant, about 2.718, and β is a value related to the standard deviation (σ) :

stands for the square root.

where ln is the natural logarithm.

In a data series, the parameters mode (μ) and β can be estimated from the average, median and standard deviation. The calculation of the last three quantities is explained in the respective Wiki pages. Then, with the help of formulas given in the previous section, the factors μ and β can be calculated. In this way, the CDF of the Gumbel distribution belonging to the data can be determined and the probability of interesting data values can be found. 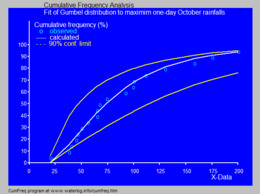 In hydrology, the Gumbel distribution is used to analyze such variables as monthly and annual maximum values of daily rainfall and river discharge volumes, and also to describe droughts.

The blue picture illustrates an example of fitting the Gumbel distribution to ranked maximum one-day October rainfalls showing also the 90% confidence belt based on the binomial distribution.

All content from Kiddle encyclopedia articles (including the article images and facts) can be freely used under Attribution-ShareAlike license, unless stated otherwise. Cite this article:
Gumbel distribution Facts for Kids. Kiddle Encyclopedia.