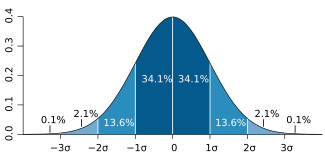 A plot of a normal distribution (or bell curve). Each colored band has a width of one standard deviation. 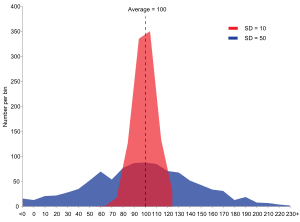 , and that of the sample by

Consider a group having the following eight numbers:

These eight numbers have the average (mean) of 5:

To calculate the population standard deviation, first find the difference of each number in the list from the mean. Then square the result of each difference:

Next, find the average of these values (sum divided by the number of numbers). Last, take the square root:

The answer is the population standard deviation. The formula is only true if the eight numbers we started with are the whole group. If they are only a part of the group picked at random, then we should use 7 (which is n − 1) instead of 8 (which is n) in the bottom (denominator) of the second-to-last step. Then the answer is the (biased corrected) sample standard deviation. This is called the Bessel's Correction.

Understanding the standard deviation of a set of values allows us to know how large a difference from the "average" (mean) is expected.

Trying to know ahead of time which teams will win may include looking at the standard deviations of the various team "statistics." Numbers that are different from expected can match strengths vs. weaknesses to show what reasons may be most important in knowing which team will win.

In money, standard deviation may mean the risk that a price will go up or down (stocks, bonds, property, etc.). It can also mean the risk that a group of prices will go up or down (actively managed mutual funds, index mutual funds, or ETFs). Risk is one reason to make decisions about what to buy. Risk is a number people can use to know how much money they may earn or lose. As risk gets larger, the return on an investment can be more than expected (the "plus" standard deviation). However, an investment can also lose more money than expected (the "minus" standard deviation). 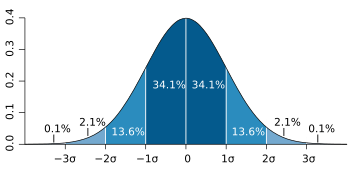 Relationship between the average (mean) and standard deviation

The average (mean) and the standard deviation of a set of data are usually written together. Then a person can understand what the average number is and how widely other numbers in the group are spread out.

The term standard deviation was first used in writing by Karl Pearson in 1894, after he used it in lectures. It was as a replacement for earlier names for the same idea: for example, Gauss used mean error.

All content from Kiddle encyclopedia articles (including the article images and facts) can be freely used under Attribution-ShareAlike license, unless stated otherwise. Cite this article:
Standard deviation Facts for Kids. Kiddle Encyclopedia.