Gutter Sound is a location in Orkney, Scotland, part of the vast anchorage of Scapa Flow. It lies to the west of the main harbour between the internal islands of Cava and Fara, and the large outer island of Hoy. Gutter Sound was the one of the sites of the mass-scuttling of the interned Imperial German High Seas Fleet in 1919, and the scene of a major salvage operation in the 1920s. Today the remaining wrecks make the Sound a popular diving location.

Gutter Sound is a body of water some four miles long and a mile wide at its widest point, and has a depth of around 30 meters in places. It separates Hoy and Cava in the north, and Hoy and Fara in the south, opening onto the Flow between Cava and Fara. In the north it opens out into the Bring Deeps, while the south it joins Weddell Sound, between Fara and Flotta, and to Switha Sound, between Flotta and Hoy. 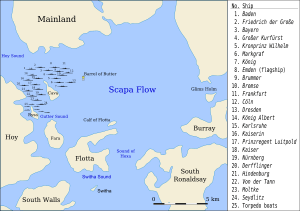 At the end of the First World War Scapa Flow was the anchorage for the surrendered German High Seas Fleet; these vessels were anchored around the island of Cava, in the Sound itself and in the Flow between Cava and the Barrel of Butter skerry. In 1919 this was the scene of the fleet's mass scuttling. 12 capital ships and a number of smaller vessels went down in the Sound itself, the remainder in deep water between Cava and the skerry.

A number of the sunken ships were salvaged by Ernest Cox during the 1920s. He used a variety of techniques, lifting the smaller ships with floating dry docks and hawsers. With the larger ships he patched all of the holes and then pumped the hulls with compressed air to force out the water and make them float upside down. Seven of the wrecks are still at Scapa Flow, and are protected as maritime scheduled ancient monuments.

During the Second World War the Sound was again used as a Royal Navy anchorage, being the site for HMS Proserpine, the stone frigate ashore base at Lyness; it also served for the anti-submarine patrol forces and their depot ship, HMS Dunluce Castle.

Commercial salvage work on the vessels ceased in the late 1970s and further salvage is no longer technically possible.

Lyness is now the site of a Naval Cemetery, and a Heritage Centre detailing these events. it is also the site of a Dive Centre, as the seven vessels that remain are a popular target for divers.

Today the seven remaining wrecks, though deep, make for popular and interesting dives for skilled scuba divers. In addition, debris and wreckage left from the ships salvaged is sometimes dived as well.

All content from Kiddle encyclopedia articles (including the article images and facts) can be freely used under Attribution-ShareAlike license, unless stated otherwise. Cite this article:
Gutter Sound Facts for Kids. Kiddle Encyclopedia.