The vessel was originally built from 1960 to 1967 for the Royal Canadian Navy, as a project for the testing of anti-submarine warfare technology on an ocean-going hydrofoil. The RCN was replaced on 1 February 1968 by the unified Canadian Armed Forces, and Bras d'Or was commissioned into that service several months later. Changes in priorities and cost overruns later led to the project's cancellation.

Bras d'Or was named in honour of Bras d'Or Lake on Nova Scotia's Cape Breton Island, where inventor Alexander Graham Bell performed hydrofoil experiments in the early 20th century near his estate and new laboratory at Beinn Bhreagh, setting the world watercraft speed record in the process. In 1909 the lake was also the historic site of the first flight of an aircraft in Canada and the British Commonwealth; the airplane, named the Silver Dart, was built by the Aerial Experiment Association under Dr. Bell's tutelage. The lake's name was thus fitting for a hydrofoil vessel which could 'fly' above an ocean's surface.

Bras d'Or was the third vessel to bear that name (see below + B-119 ex PT-3 during World War II under lend-lease) and was built at Marine Industries Limited (MIL) in Sorel, Quebec, the primary contractor being de Havilland Canada, an aircraft company. The Principal Naval Overseer was Commander Donald Clark, CD, RCN, who initiated the project on completion and launch of HMCS Nipigon in 1964. The hull was built upside down out of aluminum and rotated on 22 January 1966 when it was complete. The foil system was constructed from maraging steel.

Bras d'Or flew on a set of surface-piercing foils in a canard configuration (a small foil forward and a larger load-bearing foil aft). The foils were made of maraging steel coated in neoprene to prevent corrosion. However, the neoprene coating did not work adequately and the foils still suffered corrosion. 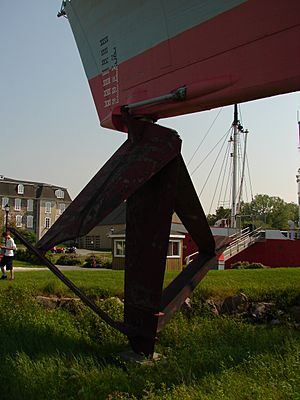 The ship's helmsman had to be qualified as both a sea pilot and an aircraft pilot. Bras d'Or had two propulsion systems: one for foilborne operation and one for hullborne operation, which included four engines. Foilborne power was provided by a FT4A-2 gas turbine developing 25,500 horsepower (19.0 MW) at 21,500 rpm through General Electric gearboxes to a pair of three-bladed supercavitating propellers. Hullborne propulsion was driven by a Paxman Ventura 16YJCM sixteen-cylinder diesel engine to a pair of variable-pitch propellers. Auxiliary power and electrical power while foilborne was provided by an ST6A-53 gas turbine powering an auxiliary gearbox. Both of the P&W turbines were built by United Aircraft of Canada. There was also a Garrett GTCP85-291 gas turbine for essential ship electrical requirements in emergencies.

The fire was put out one and a half hours later by the Sorel fire department. This delayed the ship's launch to 12 July 1968 and cost $5.7 million.

Bras d'Or first flew on 9 April 1969 near Chebucto Head off the entrance to Halifax Harbour. The vessel exhibited extraordinary stability in rough weather, frequently more stable at 40 knots (70 km/h; 50 mph) than a conventional ship at 18 knots (33 km/h; 21 mph). Bras d'Or exceeded 63 knots (117 km/h; 72 mph) on trials, quite possibly making her the fastest warship ever built. It was however, never fitted with equipment for warfare (no weapons or weapons systems) and the title now lies with the Norwegian Skjold-class corvettes that do 60 knots (110 km/h; 70 mph), fully equipped.

Bras d'Or's trial program was abruptly cancelled on 2 November 1971 by Minister of National Defence Donald S. Macdonald, attributing it to a change in defence priority (from anti-submarine warfare to sovereignty protection). The ship was laid up for five years, then the program was completely cancelled by Liberal Government under Pierre Elliott Trudeau, with most of the valuable components either sold by Crown Assets or scrapped.

The ship itself was saved and donated to the Musée Maritime du Québec at L'Islet-sur-Mer, Quebec where it remains on display to this day.

All content from Kiddle encyclopedia articles (including the article images and facts) can be freely used under Attribution-ShareAlike license, unless stated otherwise. Cite this article:
HMCS Bras d'Or (FHE 400) Facts for Kids. Kiddle Encyclopedia.