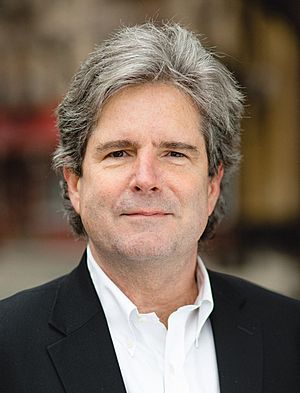 HP Newquist is an American author whose books cover a wide range of topics, from medicine and music to technology and terror. He is also a museum curator and musician, and has worked in a variety of fields as a columnist, publisher, industry analyst, and video director.

In the late 1980s and 1990s, Newquist was an advanced technology business analyst in the artificial intelligence industry. He was editor and publisher of Artificial Intelligence Trends for ten years, earning him the title "Dean of AI". During that time, he was also a columnist for several high technology publications, including Computerworld, Expert Systems Journal, and AI Expert magazine. Newquist was the chairman of the Artificial Intelligence & Advanced Technology Conference 1987 and the Society For Machine Intelligence's Expert Systems Conference 1987. The AI timeline he developed for his book The Brain Makers is frequently cited as a map of the rise and fall of the artificial intelligence industry.

During the 1990s, Newquist was the editor-in-chief of Guitar Magazine, and wrote the Disney Channel documentary episode Going Home featuring Robbie Robertson of The Band. He also directed A Portrait, a documentary featuring John Denver. Newquist's writing has appeared in dozens of publications, including The New York Times, Billboard, Newsweek, New York Press, Datamation, InTune, Computer Business Review, Guitar Player, Vintage Guitar, and Gulf Air. He has been a featured speaker at numerous events in Europe, Asia, and North America.

Apart from his writing, he is founder—and currently oversees the development—of The National Guitar Museum (NGM), the first museum dedicated to the evolution and cultural impact of the guitar, which was unveiled in August 2010. The NGM's traveling exhibits, "GUITAR: The Instrument That Rocked The World" and "Medieval To Metal: The Art & Evolution Of The GUITAR," have been touring the United States since 2011 and have been installed in more than fifty separate museum locations. He has been featured on BBC and NPR programs covering the history of the guitar.

Newquist has written works of both fiction and non-fiction. They include the award-winning The Great Brain Book: An Inside Look At The Inside Of Your Head, cited as an outstanding science book by the National Science Teachers Association and the Children's Book Council. His 2012 book, The Book Of Blood, was a finalist for the American Association for the Advancement of Science's "Science Books & Films Prize For Excellence In Science". His book For Boys Only: The Biggest, Baddest Book Ever, with Marc Aronson, was selected as a singular book for "The Teen Age" by the New York Public Library. In 2018, the NSTA and CBC awarded two of his books as among the best 21 STEM books of the year. Newquist is a four-time award winner of the "Outstanding Science Book", presented by the National Science Teachers Association. His short stories and essays have been collected in numerous anthologies.

Among his titles are:

His first novel, BEHEMOTH, a tale of suspense and terror, was published by Bloodshot Books in Fall 2019. According to The Horror Review, "BEHEMOTH is old-school gothic horror, historical horror mixed with modern-world superstitions and prejudices, and that makes things that much more chilling. Newquist has created a fine horror novel that dares to be called literary/historical fiction and entertains the reader from start to finish." Cemetery Dance magazine wrote that "BEHEMOTH is a thriller-style creature feature . . . Newquist is a great writer." His second work of fiction, a thriller entitled Ten Years Gone, was published in November 2021. Kendall Reviews rated it as one of "Top Reads Of 2021," stating the book "is pedal to the metal from Page One and showcases just how fantastic of an author Newquist is."

All content from Kiddle encyclopedia articles (including the article images and facts) can be freely used under Attribution-ShareAlike license, unless stated otherwise. Cite this article:
HP Newquist Facts for Kids. Kiddle Encyclopedia.