The National Guitar Museum (NGM) was founded to promote and preserve the legacy of the guitar, and is dedicated to its history, evolution, and cultural impact. The NGM addresses the history of the guitar as it has evolved from ancient stringed instruments to the wide variety of instruments created over the past 200 years. It focuses on the guitar's inventors, innovators, and influential players, along with the science and technology behind the guitar's construction, shape, and sound. 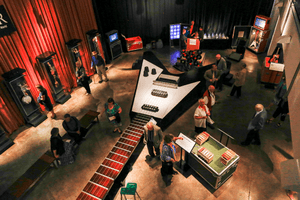 "GUITAR: The Instrument That Rocked The World" exhibit.

The museum was founded by HP Newquist, who serves as executive director. The NGM's board of advisors includes guitarists Tony Iommi, Steve Howe, Steve Vai, Ritchie Blackmore, Liona Boyd, and Joe Bonamassa. Johnny Winter served on the board prior to his death. Curators include guitar industry veterans Rich Maloof and Pete Prown.

In February 2011, the NGM launched a touring exhibit entitled "GUITAR: The Instrument That Rocked The World" that began with previews outside New York City. The national rollout was in Orlando, Florida, on June 11, 2011. The exhibit traveled to sites across the United States from 2011 to 2020. At the completion of the tour, one U.S. city is expected to be chosen to be the permanent home of the National Guitar Museum. The hosts for the GUITAR Exhibit (past and future):

The NGM also curates a touring art exhibition, "Medieval To Metal: The Art & Evolution Of The GUITAR." It debuted at the Leigh Yawkey Woodson Art Museum in Wisconsin in February 2015. It has since been presented at more than a dozen art museums in the United States, including the Vero Beach Museum of Art, The Haggin Museum, the Currier Museum of Art, the New Mexico Museum of Art, and the Butler Institute of American Art.

The NGM presents an annual "Lifetime Achievement Award" to a guitarist who has been instrumental to the legacy of the guitar. The recipients to date have been:

All content from Kiddle encyclopedia articles (including the article images and facts) can be freely used under Attribution-ShareAlike license, unless stated otherwise. Cite this article:
National Guitar Museum Facts for Kids. Kiddle Encyclopedia.