The Saint Louis Science Center, founded as a planetarium in 1963, is a collection of buildings including a science museum and planetarium in St. Louis, Missouri, on the southeastern corner of Forest Park. With over 750 exhibits in a complex of over 300,000 square feet (28,000 m2), it is among the largest of its type in the United States. 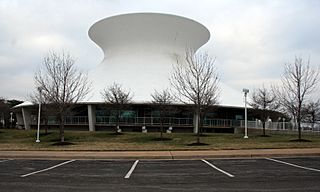 The James S. McDonnell Planetarium, built in 1963 and featuring a thin-shell and hyperboloid structure by Gyo Obata. This building is one of the most distinctive components of the Saint Louis Science Center campus

Funding for the first structure of the current campus began in 1955, with $1 million of a $110 million city bond issue specified for the construction of a planetarium. Two years were spent surveying locations. The first proposed site, on the northern side of Forest Park near the Jefferson Memorial Building at Lindell and DeBaliviere, was scrapped because of restrictions on subdivisions. The location was changed to the southern part of the park, on the site of the old mounted police station, which was demolished in 1960. The plan was to build a planetarium, science museum, and natural history museum.

The Planetarium was designed by Gyo Obata of Hellmuth, Obata and Kassabaum with a unique shape (Obata was later tasked in the 1970s with designing the Smithsonian's National Air and Space Museum in Washington, D.C.). Architectural Forum magazine described it as, "Looking like some strange craft spun down to earth from outer space... St. Louis's new planetarium perches gracefully on a rise in ... Forest Park". James Smith McDonnell (1899–1980), an aviation pioneer and co-founder of St. Louis-based McDonnell Douglas, an aerospace manufacturer, donated $200,000 for equipment such as the star projector. The facility was named after him in 1964. 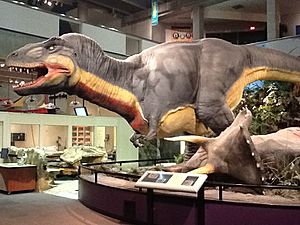 Dinosaur diorama on the lower level

In 1972, the Science Center in Clayton began to receive funds from sales tax through the Metropolitan Zoological Park and Museum District. In 1983, the St. Louis Museum of Science and Natural History purchased the Planetarium from the city, and closed it for remodeling. On July 20, 1978, the Planetarium reopened as the Saint Louis Science Center. On November 2, 1991, as part of a $34 million expansion, a new building opened across from the Planetarium south of I-64, on Oakland Avenue, increasing the size of the Science Center by a factor of seven. The new building was constructed on land that had previously been the site of the Falstaff Brewing Corporation headquarters. New exhibits in the main building were devoted to Earth science, emerging technology, life sciences, physical science, and chemistry. Within two months, the newly remodeled St. Louis Science Center became the most visited science center in the world.

One of the most recognizable features of the St. Louis Science Center is the 5-story domed OMNIMAX theater, which shows a variety of educational films and documentaries year round. Occasionally, the theater features feature films as they are released, such as Star Wars. In 2019, the OMNIMAX theater underwent the its first major renovations since opening in 1991 and became the fourth OMNIMAX theater in the world to utilize the IMAX with Laser projection system. Other improvements include new state-of-the-art sound technology, a NanoSeam screen for a more uniform screen surface, and upgraded wider seating. 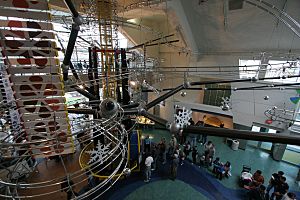 On February 8, 1997, an air-supported building was added to the main building, the Exploradome. With an additional 18,000 square feet (1,700 m2), it was intended as a temporary facility for traveling exhibitions, additional classrooms, and to host large group events. Notable exhibits have included shows on the RMS Titanic ocean liner, and Body Worlds, a traveling exhibition of preserved human bodies. From October 2011 until May 2012, the main building hosted Star Trek: The Exhibition, a major showcase of Star Trek props, costumes and artifacts, including a full-size bridge from the USS Enterprise. The Exploradome was deflated to make way for a planned expansion after 16 years of operations on June 24, 2013.

The 2018 WeatherReadyFest event was held at the St. Louis Science Center featuring talks, demonstrations and displays from the National Weather Service and other government and private agencies.

Washington University students participating in the Cognitive, Computational and Systems Neuroscience (CCSN) pathway have created a series of exhibitions displayed at the St. Louis Science Center in an outreach program since the pathway's inception in 2008.

All content from Kiddle encyclopedia articles (including the article images and facts) can be freely used under Attribution-ShareAlike license, unless stated otherwise. Cite this article:
Saint Louis Science Center Facts for Kids. Kiddle Encyclopedia.