Halfmoon Township is a township in Centre County, Pennsylvania, United States. It is part of the State College, Pennsylvania Metropolitan Statistical Area. The population was 2,667 at the 2010 census, which is a 13.2% increase since the 2000 census.

Half Moon was first settled in 1784 by Abraham Elder, who came from Franklin County. He found an abandoned cabin and stayed there for the summer. The following fall, Elder returned to his family in Franklin County, and they returned in the spring of 1785, along with Elder's brother, David.

The Abraham Elder Stone House and George Wilson Homestead are listed on the National Register of Historic Places.

According to the United States Census Bureau, the township has a total area of 23.6 square miles (61.1 km2), all of it land. 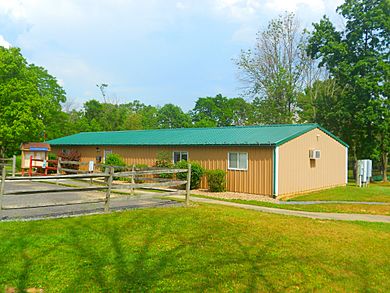 Municipal building in the township park

There were 913 households, out of which 44.1% had children under the age of 18 living with them, 79.1% were married couples living together, 2.3% had a male householder with no wife present, 3.8% had a female householder with no husband present, and 14.8% were non-families. 10.8% of all households were made up of individuals, and 3.1% had someone living alone who was 65 years of age or older. The average household size was 2.92 and the average family size was 3.19.

All content from Kiddle encyclopedia articles (including the article images and facts) can be freely used under Attribution-ShareAlike license, unless stated otherwise. Cite this article:
Halfmoon Township, Centre County, Pennsylvania Facts for Kids. Kiddle Encyclopedia.