Hampton is an unincorporated community and census-designated place (CDP) in Baltimore County, Maryland, United States. The population was 5,052 at the 2010 census. Hampton is often considered a subdivision of the nearby community of Towson and is located just north of Baltimore, about twenty minutes from downtown. Hampton contains residences situated on lots up to several acres in a park-like setting (current zoning limits density to not more than two residential units per acre). The community is anchored by its principal landmark, the Hampton National Historic Site. The Towson United Methodist Church is located in Hampton, flanked on the south by I-695 and Goucher College.

According to the United States Census Bureau, the CDP has a total area of 5.7 square miles (15 km2), all of it land.

The climate in this area is characterized by hot, humid summers and generally mild to cool winters. According to the Köppen Climate Classification system, Hampton has a humid subtropical climate, abbreviated "Cfa" on climate maps. 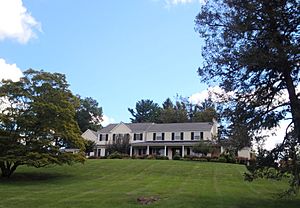 There were 1,900 households, out of which 29.1% had children under the age of 18 living with them, 75.3% were married couples living together, 5.7% had a female householder with no husband present, and 16.9% were non-families. 14.3% of all households were made up of individuals, and 8.8% had someone living alone who was 65 years of age or older. The average household size was 2.62 and the average family size was 2.89.

The Towson United Methodist Church announced plans in 2008 to sell 5 acres (2.0 ha) of undeveloped, wooded property it owns on Hampton Lane to a developer, who plans to construct a senior housing complex there. A zoning change application has been submitted to Baltimore County officials to allow 16 residential units per acre (current zoning limits density to two residential units per acre). The president of the Hampton Improvement Association, representing neighborhood residents, said his group is "focused on the zoning issues and what that could do to the character of Hampton", saying they "oppose zoning changes that would allow higher density residential development and require trees to be knocked down". A spokesman for The Shelter Group, the developer, said they are cognizant of the neighbors' concerns and "look forward to coming up with a resolution that will work for everyone". The church's senior pastor, Rev. David Cooney, told the Baltimore Sun, "We entered into this with Shelter, believing this is a good use for the land — that this is a good company and a needed service". The County Council will rule on the zoning change, after planning staff evaluation and public hearings, in September 2008.

All content from Kiddle encyclopedia articles (including the article images and facts) can be freely used under Attribution-ShareAlike license, unless stated otherwise. Cite this article:
Hampton, Maryland Facts for Kids. Kiddle Encyclopedia.