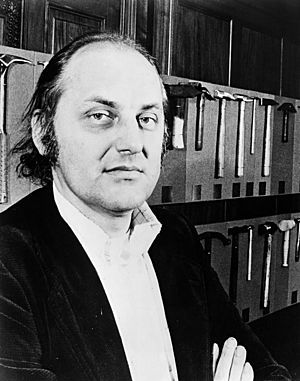 Hans Hollein (30 March 1934 – 24 April 2014) was an Austrian architect, designer, sculptor and architectural theorist. His best known works were: Museum für Moderne Kunst and Haas House. He was also the winner of the Pritzker Architecture Prize in 1985. He was born in Vienna.

All content from Kiddle encyclopedia articles (including the article images and facts) can be freely used under Attribution-ShareAlike license, unless stated otherwise. Cite this article:
Hans Hollein Facts for Kids. Kiddle Encyclopedia.