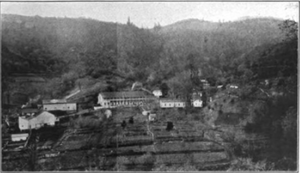 Harbin Hot Springs is a non-profit hot spring retreat and workshop center at Harbin Springs in Lake County, Northern California. It is located about two hours northeast of the San Francisco Bay Area, in the United States. The facility was partially destroyed in the Valley Fire in September 2015, and was temporarily closed; in December 2016 it was announced that operations would resume in the spring of 2017

The baths were commercially developed by settlers in the 1860s, when buildings were erected on the site. The region is prone to wildfires, and over the years, successive lodges have been rebuilt when they burned down. Harbin Hot Springs issued several postcards advertising the resort in the 1920s and 1930s. In the late 1960s and early 1970s, the property was run as a commune with the name Harbinger, "centered around a man named Don Hamrick, a charismatic fellow who wore business suits and combined science with spiritualism in his lectures/sermons". In 1969, Harbinger had about 120 people, but ultimately, the community did not thrive.

The resort was evacuated because of the Valley Fire on September 12, 2015. By September 14, Harbin was almost completely destroyed by the fire with only the pool complex largely intact.

Robert Hartley (AKA Ishvara) bought the land in 1972 to be a Gestalt center. Sold to the Heart Consciousness Church (HCC) in 1975, Harbin/HCC operates as an intentional community where approximately 150 residents live and operate the Retreat Center for outside visitors. Harbin/HCC maintains a more specifically religious organization, the New Age Church of Being, incorporated in 1996. Harbin is a center for the expression of New Age beliefs. Harbin's clothing-optional policy, its pools, and the natural beauty of the local landscape are part of Harbin's appeal to visitors, who must agree to membership, if only temporarily, for admission. 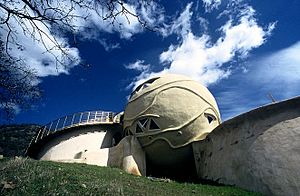 Harbin has been a center for the development of new modes of healing and personal development, including Watsu (water shiatsu), a massage technique created by Harold Dull at Harbin in the early 1980s. Watsu, based on gently moving the body through water, is now practiced in spas throughout the world.

All content from Kiddle encyclopedia articles (including the article images and facts) can be freely used under Attribution-ShareAlike license, unless stated otherwise. Cite this article:
Harbin Hot Springs Facts for Kids. Kiddle Encyclopedia.