According to the United States Census Bureau, the Harbison Canyon census-designated place (CDP) has a total area of 10.1 square miles (26 km2), all land.

There were 1,274 households out of which 37.3% had children under the age of 18 living with them, 63.9% were married couples living together, 8.2% had a female householder with no husband present, and 22.8% were non-families. 16.9% of all households were made up of individuals and 4.7% had someone living alone who was 65 years of age or older. The average household size was 2.86 and the average family size was 3.22.

John Stewart Harbison was born the third child of William and Margaret (Curry) Harbison, on a farm near Freedom, Beaver County, Pennsylvania, on September 29, 1826. 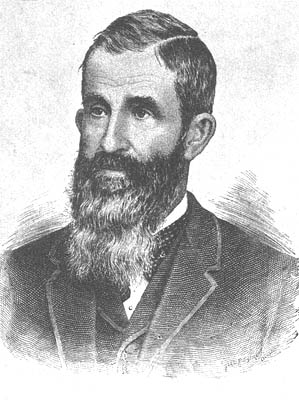 He became a bee keeper in the tradition of his father, and later migrated to the west coast of the United States. After spending some years in other California locations, he eventually arrived in San Diego aboard the ship "Orizaba" with one hundred and ten colonies of bees on November 28, 1869. In the spring of 1874 he moved with his wife and daughter to a homestead near the Sweetwater River twenty-three miles east of San Diego in a little valley now known as Harbison Canyon. Within seven years time, he was the largest producer of honey in the world, operating 2000 to 3000 hives. At that time, having several hundred hives was considered a large operation.

His success in capitalizing on the vast honey potential of San Diego County, along with his extensive campaign of selling bees to the residents of the county was the major force in making San Diego County the greatest honey producing county in the State of California by 1874, which in turn made California the leading honey producing state of the Union. John Harbison was a major contributor to the theory of bee culture with his development of new tools and methods that characterized the remarkable advances made in nineteenth century apicultural science. Harbison and his brother William were both important 19th century American authors on bee keeping science. Furthermore, he opened up the great retail markets east of the Mississippi River needed to absorb the tremendous honey crops produced in California. Harbison, known as the "King of the Beekeepers" died on October 12, 1912, in San Diego at the age of eighty-six.

Harbison Canyon was twice devastated by wildfires, first by the Laguna Fire in 1970 then again by the Cedar Fire on October 26, 2003, the worst firestorm in California history. The town lost 370 homes out of 420 in the community. Homes were still being rebuilt as recently as 2007. The community was bestowed considerable attention by the news media, which led to a visit within weeks by Governor Gray Davis, Governor-elect Arnold Schwarzenegger, his wife Maria (Kennedy-Schriver) Schwarzenegger and President George W Bush. The president arrived by helicopter which landed on the grounds of the Shadow Hills Elementary School. 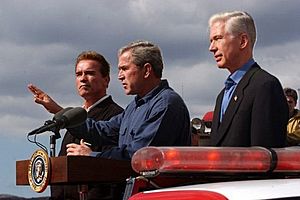 The community received help in rebuilding from many organizations, most notably from the New York Says Thank You Foundation which was created in response to the tremendous support given to New Yorkers from people all over the United States after the terrorist attacks of 9/11/2001. Since 2003, the Harbison Canyon Lions Club has participated in numerous post-disaster rebuilding projects around the U.S. sponsored by the NYSTY Foundation.

Harbison Canyon, apart from its unfortunate encounters with wildfires, is best known among locals for the presence of Old Ironsides Park, maintained by the County of San Diego Parks and Recreation. Kumeyaay Indian relics can be found near the stream that runs through the park and Canyon. The park also has a community center building where community and civic groups meet.

All content from Kiddle encyclopedia articles (including the article images and facts) can be freely used under Attribution-ShareAlike license, unless stated otherwise. Cite this article:
Harbison Canyon, California Facts for Kids. Kiddle Encyclopedia.