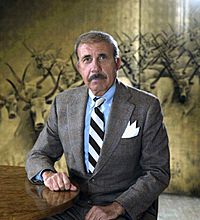 Harry Joseph Middleton, Jr. (October 24, 1921 – January 20, 2017) was an American journalist, author, and library director. He served as Lyndon B. Johnson's Presidential speech writer and staff assistant from 1967 to 1969. In 1970, Johnson named him the director of the Lyndon Baines Johnson Library and Museum (LBJ Library) on the campus of the University of Texas at Austin. He retired in 2002. Middleton also served as Executive Director of the Lyndon Baines Johnson Foundation from 1993 until 2004.

Middleton was born in Centerville, Texas. He studied at Washburn University and at Louisiana State University. Middleton died at his home in Austin, Texas on January 20, 2017, aged 95.

All content from Kiddle encyclopedia articles (including the article images and facts) can be freely used under Attribution-ShareAlike license, unless stated otherwise. Cite this article:
Harry J. Middleton Facts for Kids. Kiddle Encyclopedia.