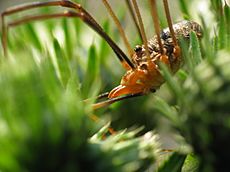 A harvestman (a male Phalangium opilio), showing the almost fused arrangement of abdomen and cephalothorax that distinguishes these arachnids from spiders.

Harvestmen are eight-legged arachnids. Even though they belong to the arachnid family, harvestmen are not spiders. They are in the order Opiliones or Phalangids.

More than 6,400 species of harvestmen have been discovered, although the real number of extant species may be more than 10,000. Well-preserved fossils have been found in the 400-million year old Rhynie cherts of Scotland. The samples found look surprisingly modern. Apparently, the basic structure of the harvestmen has not changed much since then.

In some places, harvestmen are known by the name "daddy longlegs", but this name is also used for two other unrelated arthropods: the crane fly (Tipulidae) and the cellar spider (Pholcidae).

Many species are omnivores, they eat anything they can find. Most of the time this is small insects, and some plants and fungi. Some are scavengers.

Harvestmen are not dangerous to humans. None of the described species has poison glands. They are not "true" spiders even though they look like spiders in many ways. For example, harvestmen have no venom or silk glands; spiders have these.

These arachnids have exceptionally long walking legs, compared to body size, although there are also short-legged species. In harvestmen the two main body sections (the abdomen and cephalothorax) are broadly joined, so that they appear to be one oval structure; they also have no venom or silk glands, unlike true spiders. In more advanced species, the first five abdominal segments are often fused into a dorsal shield called the scutum, which is normally fused with the carapace. In some species, this shield is only present in males. The second pair of legs is longer than the others and works as antennae. This can be hard to see in short-legged species.

The feeding apparatus (Stomotheca) differs from other arachnids as they are able to eat their food in chunks, without needing to liquify it. Most species have a single pair of eyes in the middle of their heads, oriented horizontally. However, there are some eyeless species. 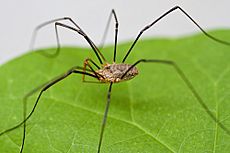 All content from Kiddle encyclopedia articles (including the article images and facts) can be freely used under Attribution-ShareAlike license, unless stated otherwise. Cite this article:
Opiliones Facts for Kids. Kiddle Encyclopedia.