Hatley is a village in Marathon County, Wisconsin, United States. It is part of the Wausau, Wisconsin Metropolitan Statistical Area. The population was 574 at the 2010 census.

A post office called Hatley has been in operation since 1881. The village was named after Hatley, Quebec, the former hometown of an early settler.

According to the United States Census Bureau, the village has a total area of 1.05 square miles (2.72 km2), all of it land.

There were 223 households, of which 34.1% had children under the age of 18 living with them, 60.1% were married couples living together, 6.7% had a female householder with no husband present, 4.9% had a male householder with no wife present, and 28.3% were non-families. 20.2% of all households were made up of individuals, and 5.8% had someone living alone who was 65 years of age or older. The average household size was 2.57 and the average family size was 3.00. 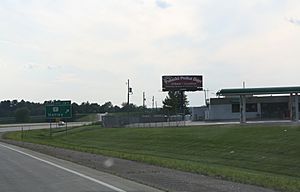 In June 2005, the Hatley Branch Library and the Community/Senior Center opened its doors to serve eastern Marathon County, including Bevent, Elderon, Hatley, Norrie, Reid, and Ringle.

Hatley Branch Library is the newest member of the Marathon County Public Library system and offers all available library services. The community center is composed of a multi-purpose room, meeting room, offices and kitchen, and is used for area events, meetings and is available for general public use.

The Hatley Elementary School is part of the DC Everest School District. It goes through grades kindergarten to 5th grade and has one class per grade.

All content from Kiddle encyclopedia articles (including the article images and facts) can be freely used under Attribution-ShareAlike license, unless stated otherwise. Cite this article:
Hatley, Wisconsin Facts for Kids. Kiddle Encyclopedia.