The Hatzic Valley is the southerly, lowland portion of the Fraser Valley Regional District Electoral Area "F" of British Columbia’s Lower Mainland. The valley was carved as a result of southward glacial action, being "centered along a low‐lying glacial trough that extends from Stave Lake to the Fraser Valley."

The perimeter of Hatzic Valley is described in the current British Columbian Official Community Plan document “Official Community Plan for Hatzic Valley, Electoral Area “F” Bylaw No. 0999, 2010”, published by the Fraser Valley Regional District, and which illustrates the valley as occupying the area from the southeast point of Stave Lake in the northwest to Hatzic Lake in the south.

The valley is flanked on the eastern side by the Douglas Ranges, the ridge nearest the valley known as Durieu Ridge, the southern point of which forms Dewdney Peak. The valley includes the area occupied by Davis Lake Provincial Park and Mount St. Benedict in the north and that of Cascade Falls Regional Park in the northeast. The valley measures about 12.5 kilometers long from Davis Lake to Hatzic Lake, and about 2.5 kilometers wide at Durieu. The valley is home to approximately 1,300 people.

Hatzic Valley in turn comprises various unincorporated communities, specifically Hatzic Prairie in the south, the town of Durieu in the center, and the localities of McConnell Creek and Miracle Valley in the north.

Historically, McConnell Creek supported various timber mills, all of which have since shut down. The area was electrified in 1949, the same year that the McConnell Creek Community Hall on Hartley Road opened.

Miracle Valley is a 160 acres (0.65 km2) parcel of land located at 14100 Stave Lake Road within the McConnell Creek community. It was purchased in 1963 by The Salvation Army, and is so-named as the Salvation Army used it as a rehabilitation center for recovering substance abusers. The facility ran into financial difficulties and closed in 2010, it was sold to become Khalsa Centre, a cultural retreat/campground with an attached blueberry farm.

Hatzic Prairie is the portion of Hatzic Valley that exists south of Durieu Road.

Historically, Hatzic Prairie was first occupied by members of the Kwantlen (formerly Sto:lo) First Nations as a summer camping place. The first recorded settler of European descent was the Irish squatter John or James Kelly in the 1860s who was formerly a Cariboo teamster, and further to being apprehended for illegally importing cattle was deported and left for the USA. Subsequently in the 1880s some 1,200 acres of land, up to present-day Durieu Road was owned by the Burton family, and known as "Burton Prairie". The name changed around 1889 after Ralph Burton sold up because of the flooding of the Fraser River. One of the new owners, Livingston Thompson - a former army captain - built a post office that opened on 1 April of the same year, he became the first postmaster and renamed the land to Hatzic Prairie. 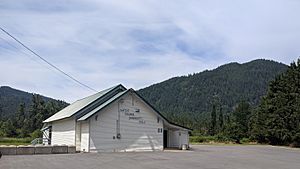 The post office was subsequently renamed on 1 March 1910 as "Durieu Post Office" in remembrance of the life of the Archbishop of New Westminster Pierre-Paul Durieu who had died around a decade earlier. This name change led to the settlement name "Durieu" being recognised on 12 December, 1939 by British Columbian government officials and cartographers. Although the post office closed around three years later on 31 December 1942, the name Durieu stuck, in fact Durieu was elevated from "settlement" to "community" status since the BC government definition of community had been met, being "an unincorporated populated place, generally with a population of 50 or more, and having a recognized central area that might contain a post office, store and/or community hall, etc, intended for the use of the general public in the region".

The name "Hatzic Prairie" owes its existence to renaming by Livingstone Thompson further to the land sale by Ralph Burton, a sale which, as mentioned above, would not have occurred but for flooding of the area by the Fraser River. The area continued to flood - notably in 1894 - but the most serious recorded flooding by the Fraser River was the "Great Flood" of 1948 which flooded over 13,000 acres of land in adjacent lowland areas, twelve square miles of which were on Hatzic Prairie.

Because of historical issues with flooding, extensive studies have been completed regarding potential floodwater impact on lower-lying Fraser Valley communities. These studies have focussed in particular on Hatzic Prairie, where much of the terrain is lower than 20 meters above sea level, being for the most part drained by Legace Creek, which additionally drains Pattison Creek. These studies include the following publications:

Since the above reports were published, The Fraser Basin Council has embarked on authoring a multi-phase Lower Mainland Flood Management Strategy (LMFMS), the first phase of which completed in 2016, being focussed on "BC Lower Mainland flood scenarios, a regional assessment of flood vulnerabilities and a review of flood protection works and practices in the region." In commenting on the maps published under Phase 1 of the LMFMS, The Hope Standard observed that "the deepest floodwaters would swamp the north and east of Hatzic Lake, in and around Dewdney and Deroche on the north side of the Fraser River, and the Glen Valley in northwest Abbotsford and northeast Langley, where many areas could see flood waters rise three metres or more above ground."

The second phase of the LMFMS program consists of multiple projects, and has the purpose of "developing a long-term strategy", having an expected completion date of late 2020/ early 2021.

There are three known aquifers in the Hatzic Valley area

The Hatzic Prairie and Cascade aquifers are described as "highly vulnerable" because of high levels of soil permeability, readily allowing contaminants into the aquifer. The McConnell Aquifer is described as having "low vulnerability because the aquifer is capped with relatively impermeable sediments, which prevent contaminants from entering the aquifer." However Tom Millard, geomorphologist, indicates in his 2013 paper titled "Hatzic Region Hydrology and Watershed Stability Assessment" that the low vulnerability aquifer may not replenish as readily as the others because of its permeability.

Many of the residents in Hatzic Valley have wells directly connecting to one of the three abovenamed aquifers. Additionally, the FVRD supplies water south of Durieu Road via various wells, pumps, reservoirs and pipelines. Groundwater in the Hatzic Prairie community is an ongoing concern on account of the heightened water table relative to ground level and resulting potential contamination of fresh water by farms and septic systems, especially given the vulnerability of the aquifer as described above.

Expansion of the current FVRD supply system is an ongoing concern, with a number of studies and academic publications probing sustainability and hydrogeological issues. These include a 2011 study by Thomas D'Hoore of UBC on behalf of various Hatzic Valley Ratepayer Associations and 2012 (Miracle Valley Aquifer paper), 2014 (Well viability paper with regard to the Hatzic Prairie and Miracle Valley Aquifers), and 2017 (Construction and testing of a named production well in the valley) publications by Piteau Associates on behalf of the District of Mission and the FVRD. Additionally, hydrogeological and water-related plans and issues are described by the Hatzic Valley Official Community Plan.

As of March 2019 the FVRD has indicated, notwithstanding concerns regarding sustainability, that construction of an additional well will commence immediately in order to avoid potential loss of a financial grant by the Clean Water and Wastewater Fund.

The bulk of the privately owned land in Hatzic Valley is within the British Columbia Agricultural Land Reserve. Accordingly, land in the valley is used residentially and economically for hobby and commercial farming. Natural resources such as timber and aggregate are also extracted from neighbouring hills and mountains.

All content from Kiddle encyclopedia articles (including the article images and facts) can be freely used under Attribution-ShareAlike license, unless stated otherwise. Cite this article:
Hatzic Valley Facts for Kids. Kiddle Encyclopedia.