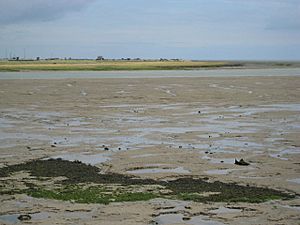 It is linked by bridges to the mainland and to New England Island, from which the road continues to Foulness. Its south east coast borders the North Sea and like its south west shore is protected by levees.

The island has never been heavily populated and now has a few buildings along its single road. Its southern end is Ministry of Defence land.

HMS Beagle is said to have been used to block one of the channels around the island in its last days.

All content from Kiddle encyclopedia articles (including the article images and facts) can be freely used under Attribution-ShareAlike license, unless stated otherwise. Cite this article:
Havengore Island Facts for Kids. Kiddle Encyclopedia.