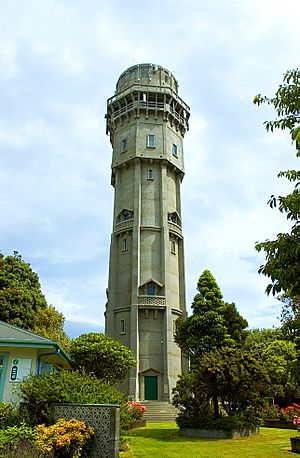 The water tower at Hawera

Hawera is the second-largest town in the Taranaki region of New Zealand's North Island, with a population of 11,800. It is near the coast of the South Taranaki Bight.

Hawera is Māori for "burnt place", from fighting between two local sub-tribes, which culminated in the setting ablaze of the sleeping whare (house) of the tribe under attack. The name became apt when the town suffered extensive blazes in 1884, 1888, and 1912. For this reason a large water tower was built in the centre of town to increase water pressure; and this became one of Taranaki's best-known landmarks (appearing, for example, on the cover of the 1974 telephone directory). After falling into disrepair the tower was closed to the public in 2001, but after an extensive restoration program it opened again in 2004.[1]

Hawera is also home to Tawhiti Museum, well known for its hand-crafted life-sized wax sculptures depicting scenes of local heritage and history, and its scale models of local Maori pa.

All content from Kiddle encyclopedia articles (including the article images and facts) can be freely used under Attribution-ShareAlike license, unless stated otherwise. Cite this article:
Hawera Facts for Kids. Kiddle Encyclopedia.