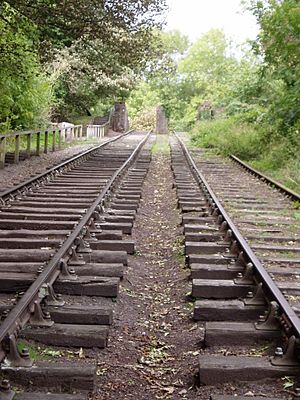 The Hay Inclined Plane is a canal inclined plane in the Ironbridge Gorge in Shropshire, with a height of 207 feet (63 m). It was located at the end of the Shropshire Canal, part of a network of canals that linked the industrial region of east Shropshire with the River Severn. The inclined plane was in operation from 1793 to 1894. It can be visited as part of the Blists Hill Victorian Town and is also a waypoint on the South Telford Heritage Trail.

The proprietors of the Shropshire Canal held a competition in 1788 to find the best means of raising and lowering heavy weights between the canal and the river Severn. They selected a design by Henry Williams and James Loudon, which was also used at a number of other inclined planes in east Shropshire. Construction of the Hay inclined plane was completed in 1793. By 1820 it was in poor condition and substantial repairs were needed. Further repairs were also carried out in the 1940s.

In 1857 the Hay inclined plane was taken over by the London and North Western Railway. The following year the LNWR closed the Shropshire canal between the Wrockwardine Wood and Windmill inclined planes, leaving only a short section of canal to serve the industrial area of Blists Hill. In 1861 they opened the Coalport branch line from Wellington to Coalport which passed underneath the Hay inclined plane near Coalport.

The last recorded use of the Hay inclined plane was thought to be in 1894 and it was formally closed in 1907. It was restored in 1968 and again in 1975, including the reinstatement of rails, as part of the creation of the Ironbridge Gorge Museums.

Although the loaded boats were travelling downhill, and so the plane was mostly worked by gravity, a small steam engine was also provided and drove the winding drums. This was of Adam Heslop's design, a twin-cylindered rotative beam engine, to a design patented in 1790. The remains of the brick boiler house and winding mechanism may be seen at the top of the incline.

The system was worked by four men and took around four minutes to raise or lower a boat.

All content from Kiddle encyclopedia articles (including the article images and facts) can be freely used under Attribution-ShareAlike license, unless stated otherwise. Cite this article:
Hay Inclined Plane Facts for Kids. Kiddle Encyclopedia.