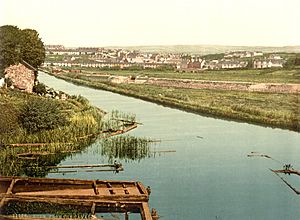 The main virtue of tub boats was their flexibility. They could be drawn in trains of 3-10 or more boats using horse power, or later steam tugs, where the number of boats was varied according to the type of cargo. Tubs could be lifted more easily than larger boats and tub boat lifts and inclined planes were developed as an alternative to canal locks, particularly in or near a colliery or similar industrial works. At a lift the train could easily be divided, the boats lifted individually, and the train reassembled afterwards. Sometimes the boats used snug-fitting non-waterproof inner containers which could be more easily lifted out. Because of their small size, the canals that were built for tub boats could also be smaller, saving considerable construction cost. 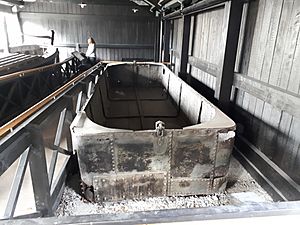 The first use of tub boats in England was on the Bridgewater Canal. Other notable uses were on the Shropshire Union Canal and the Bude Canal.

One tub-boat is preserved in the Blists Hill Victorian Town museum. It was rescued from a farm in 1972, where it was in use as a water tank. Before its discovery, it was thought that all tub boats on the Shropshire Canal were made of wood.

In later years, larger versions of tub boats included the Tom Pudding on the Aire and Calder Canal and the Hargreave barge used on the same waterway.

All content from Kiddle encyclopedia articles (including the article images and facts) can be freely used under Attribution-ShareAlike license, unless stated otherwise. Cite this article:
Tub boat Facts for Kids. Kiddle Encyclopedia.