He Lives in You facts for kids 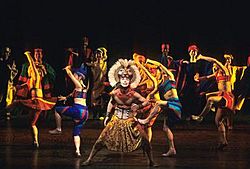 Simba and the ensemble performing "He Lives in You" from the second act of The Lion King musical. Photograph is of the original Korean cast.

"He Lives in You" is a song written and performed by Lebo M. and his South African Choir for Rhythm of the Pride Lands, an album inspired by the film The Lion King. It is performed twice in the musical adaptation of the film, and a shorter version of the song was used for the opening of The Lion King II: Simba's Pride. The song was co-written by Mark Mancina and Jay Rifkin.

The song is used twice in the musical based on the film, once in each act. During the first act, it is sung by Mufasa to young Simba as "They Live in You". The lyrics were changed slightly to represent the Great Kings of the Past - reference is made to the stars from which the Great Kings of the Past are believed to watch over the world. Mufasa, during the song, shows Simba that he is never alone as there is always someone watching over him. The song is performed by Mufasa and the ensemble and has a reverent and subdued tone throughout.

In the second act, the song is sung by Rafiki, the ensemble and adult Simba as "He Lives in You". The first part of the song is subdued and sung by Rafiki and the ensemble as Rafiki summons Mufasa's spirit. Mufasa's spirit appears and instructs Simba to return home and take his rightful place as king. After Mufasa's spirit fades Simba realizes that he must take responsibility and return home. At this point there is an instrumental break, after which the song becomes livelier and Simba joins in the celebratory singing after realizing his responsibilities as the true king.

The song is used in the opening sequence of the 1998 film, sung by Lebo M.. Animals are shown traveling to Pride Rock to witness the presentation of Simba and Nala's daughter, Kiara. The main theme of the song is that Mufasa's legacy lives on, despite his death. Mufasa's spirit is also seen watching over the presentation.

Lebo M. performs a version of the song that plays over the credits of the 2019 version of The Lion King and is included on the film's soundtrack.

Tina Turner's version was featured on the compilation album The Lion King Collection as well as the credits of the film .

Diana Ross recorded the song for her 1999 album, Every Day Is a New Day and for the 1999 movie Double Platinum where her character Olivia King sang it.

TRF recorded the song for the Japanese version of Simba's Pride, releasing their version as their 25th single in 1999.

Lonnie Gordon recorded a house version for her album No Regret and released it as a single in 2001. The same year, Michael Crawford sang this song as part of a medley on The Disney Album.

"They Live in You" was used by Johnny Mathis for his 2000 album, Mathis on Broadway.

The song was covered by Elijah Kelley for Disneymania 6.

Michael Ball and Alfie Boe covered the song on their album Together Again in 2017.

Destiny Chukunyere covered it during Movie Week and her finale performance in the second season of X Factor Malta in 2020.

All content from Kiddle encyclopedia articles (including the article images and facts) can be freely used under Attribution-ShareAlike license, unless stated otherwise. Cite this article:
He Lives in You Facts for Kids. Kiddle Encyclopedia.