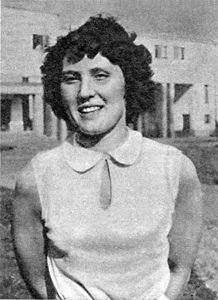 Helena Rakoczy (née Krzynówek; 23 December 1921 – 2 September 2014), also Rákóczy or Rákóczi, was a Polish gymnast. She competed in two Summer Olympic Games: 1952 in Helsinki, Finland and 1956 in Melbourne, Australia. After a poor performance in 1952, she had a successful one in 1956, winning a bronze medal. After this, she became the most decorated gymnast from Poland.

Rakoczy was born in Kraków. In 2004, she was added to the International Gymnastics Hall of Fame.

Rakoczy died from natural causes on 2 September 2014 in Kraków, aged 92.

All content from Kiddle encyclopedia articles (including the article images and facts) can be freely used under Attribution-ShareAlike license, unless stated otherwise. Cite this article:
Helena Rakoczy Facts for Kids. Kiddle Encyclopedia.