Kids Encyclopedia Facts
This page is about the war memorial in Thailand. For location in North Africa, see Halfaya Pass. For other uses of the name Hellfire, see Hellfire (disambiguation). 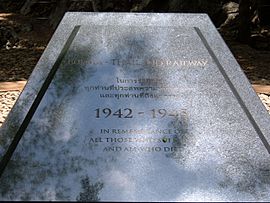 The Australian memorial in the cutting

Hellfire Pass (Thai: ช่องเขาขาด, known by the Japanese as Konyu Cutting) is the name of a railway cutting on the former Burma Railway ("Death Railway") in Thailand which was built with forced labour during the Second World War, in part by Allied prisoners of war. The pass is noted for the harsh conditions and heavy loss of life suffered by its labourers during construction. Hellfire Pass is so called because the sight of emaciated prisoners labouring at night by torchlight was said to resemble a scene from Hell.

Hellfire Pass in the Tenasserim Hills was a particularly difficult section of the line to build. It was the largest rock cutting on the railway, coupled with its general remoteness and the lack of proper construction tools during building. A tunnel would have been possible to build instead of a cutting, but this could only be constructed at the two ends at any one time, whereas the cutting could be constructed at all points simultaneously despite the excess effort required by the POWs. The Australian, British, Dutch and other allied Prisoners of War were required by the Japanese to work 18 hours a day to complete the cutting. Sixty-nine men were beaten to death by Japanese guards in the six weeks it took to build the cutting, and many more died from cholera, dysentery, starvation, and exhaustion (Wigmore 568). However, the majority of deaths occurred amongst labourers whom the Japanese enticed to come to help build the line with false promises of good jobs. These labourers, mostly Malayans (Chinese, Malays and Tamils from Malaya), suffered mostly the same as the POWs at the hands of the Japanese. The Japanese kept no records of these deaths.

The railway was never built to a level of lasting permanence and was frequently bombed by the Royal Air Force during the Burma Campaign. After the war, all but the present section was closed and the line is now only in service between Bangkok and Nam Tok Sai Yok Noi. 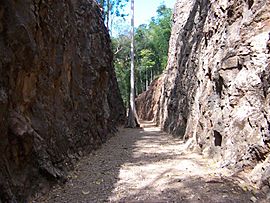 There are no longer any trains running on this stretch of the line. The nearest railway station is at Nam Tok Sai Yok Noi, where trains of the State Railway of Thailand can be taken for a trip over the Whampo Viaduct and across the bridge over the River Kwai to Kanchanaburi, which is the nearest major town and tourist base. Visitors to the museum usually base themselves in Kanchanaburi.

The Hellfire Pass Memorial Museum and the preservation of the Hellfire Pass itself had its origins in 1983 when former Prisoner of War J.G. (Tom) Morris toured the area in Thailand and resolved to convince the Australian Government that portions of the Thai-Burma Death Railway should be preserved as an historical site. As a result of his efforts, the Snowy Mountains Engineering Corporation (SMEC) was commissioned in 1984 to make a survey of the railway to choose a suitable site. Jim Appleby, a SMEC engineer at the Khao Laem dam-site on the upper Kwai Noi, did much of the ground work and passed his reports to the Australian-Thai Chamber of Commerce in 1985. The first Dawn Service was held at the Hellfire Pass on Anzac Day, 1990, and the preservation and museum developed through efforts by both the Thai and Australian governments.

The museum is co-sponsored by the Royal Thai Armed Forces Development Command and the Australian government at the site to commemorate the suffering of those involved in the construction of the railway. It was built by the Office of Australian War Graves and opened by the then Prime Minister of Australia, John Howard. As a part of the museum experience, it is possible to walk through the cutting itself and along a section of the former railway track bed. An audio tour including recorded memories of surviving POWs is available at the museum.

In 2006, proposals to create a railway network linking eight south-east Asia countries would see a railway link restored between Thailand and Myanmar. It is not clear if this would follow the original Death Railway route through Hellfire Pass, since this route was necessarily built quickly and to low standard of curves and gradients.

All content from Kiddle encyclopedia articles (including the article images and facts) can be freely used under Attribution-ShareAlike license, unless stated otherwise. Cite this article:
Hellfire Pass Facts for Kids. Kiddle Encyclopedia.