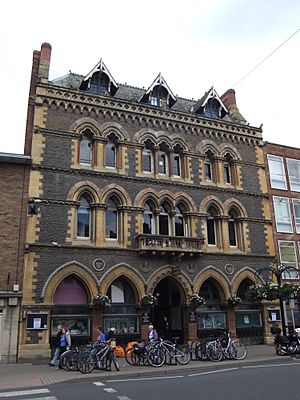 The Hereford Museum and Art Gallery is a local museum in the cathedral city of Hereford, Herefordshire, England.

The museum is housed in a Victorian Gothic building. Through the generosity of James Rankin, President of the Woolhope Naturalists' Field Club, it was opened as a free library and museum on 8 October 1874 and has since exhibited artefacts, fine art, and decorative art associated with the local area. 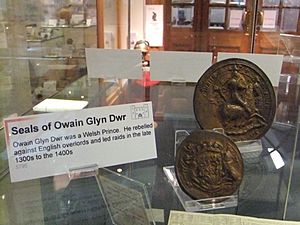 Seals of Owain Glyndŵr on display in the museum

There are regular temporary exhibitions of craftwork, paintings, photography, and prints. In 2006, the bicentennial of Joseph Murray Ince was celebrated with an exhibition.

The designs of Christopher Dresser were exhibited in 2007. An exhibition of work by the locally born artist Brian Hatton (1887–1916) was displayed at the gallery between November 2007 and January 2008.

Having closed temporarily for building repairs in September 2015, the Hereford Museum and Art Gallery re-opened for the summer months in July 2017. As of July 2017, exhibits in the museum include a two-headed calf, a two-metre long fish, various swords, elements of costume and textiles, as well as objects of historic, social and scientific interest dating back from the pre-historic era up to the 20th century. The gallery currently has over 80 works by Brian Hatton, as well as many of his materials and selected letters.

In 2005, the museum became the first in the United Kingdom to invest in the Talking Tactile Tablet (T3), developed at the UK's Royal National College for the Blind in Hereford together with a software company based in the USA.

All content from Kiddle encyclopedia articles (including the article images and facts) can be freely used under Attribution-ShareAlike license, unless stated otherwise. Cite this article:
Hereford Museum and Art Gallery Facts for Kids. Kiddle Encyclopedia.