Heslington Church is in the parish (and village) of Heslington, near York, England. As well as the village and some more modern housing estates, the church also serves some outlying farms. The Heslington campus of the University of York is also in the parish.

It is a local ecumenical partnership between the Church of England and the Methodist Church, making it one of few joint Methodist/Anglican churches. It was formed from Saint Paul's Church, Heslington and Heslington Methodist Chapel in 1971, the name of the combined church being "Heslington Church", though some people still incorrectly refer to it as "St Paul's". The old Methodist Chapel is now the village meeting room.

The earliest record of the parish of Heslington is in 1299; it was from that time until 1842 subject to the peculiar jurisdiction of the Prebend of Ampleforth. The advowson passed to the Archbishop of York in 1842.

Originally constructed in 1858, the building still looks like a Victorian parish church from the south. It was extended in the 1970s by the ecclesiastical architect Ronald Sims; he removed the old north wall, and added a modern suite of meeting rooms, including a vestry and kitchen, on the north side. The old choir and sanctuary now form a separate chapel, and the congregation sits in a semicircle facing the new altar to the north. Sims's design makes use of exposed breeze blocks and concrete lintels which are not to everyone's taste. The building is now a Grade II listed building.

Each denomination in the ecumenical partnership is represented by a member of clergy; the Anglican vicar is Rev. Johannes Nobel, while Rev. Rory Dalgliesh, Methodist chaplain to the University of York, represents the Methodist Church. Most Rev. Rowan Williams, Anglican chaplain to the university, frequently worships at the church, although the church and the university chaplaincy are officially separate. Services are conducted from a combined liturgy, written by the church.

Sunday services take place at 10.00am. Aside from the usual midweek meetings, the church also plays host to various university groups throughout the week. 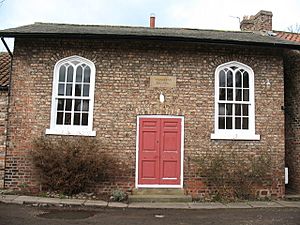 All content from Kiddle encyclopedia articles (including the article images and facts) can be freely used under Attribution-ShareAlike license, unless stated otherwise. Cite this article:
Heslington Church Facts for Kids. Kiddle Encyclopedia.