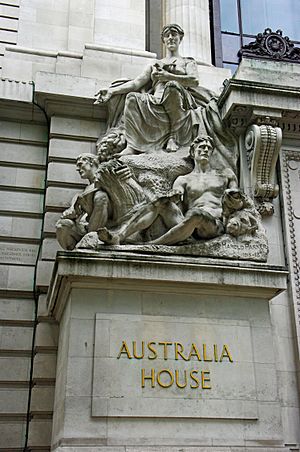 A major landmark on Strand, London, construction on the building by the Dove Brothers commenced in 1913, but shipping problems caused by World War I delayed completion. It was officially opened by King George V in a ceremony on 3 August 1918 attended by the Australian Prime Minister William Morris Hughes. The cost of the triangular shaped land was £379,756 when purchased by the Commonwealth of Australia in 1912 and building and other associated costs brought total expenditure to about £1 million. The building was designed by Scottish architects, Alexander Marshall Mackenzie and his son, Alexander George Robertson Mackenzie following an architectural competition, the judges of which included Bertram Mackennal, John Longstaff, George Washington Lambert, Fred Leist and Arthur Streeton. The Commonwealth of Australia's chief architect, John Smith Murdoch, travelled to London to work with the Mackenzie firm on the building.

Although an Official Secretary had been appointed to London as early as 1906, the High Commission to London was the first Australian diplomatic mission and one of the most prominent in London.

The building itself, was built over a 900 year old sacred well drawing from the River Fleet, a subterranean river underneath London. The water in the well is clear and has been tested as safe to drink.

Much of the building materials used in its construction were imported from Australia. The building is of Portland stone on a base of Australian trachyte. The marbles used include dove-coloured Buchan marble from Victoria, the light and dark Caleula from New South Wales, and white Angaston marble from South Australia. The joinery and flooring timbers include timber varieties from all Australian States but the most prominent of these is black bean, a very hard and dense wood similar to English oak, used principally for panels of the first floor Downer Room where the carvings represent arts and sciences. This work is credited to Messrs Wylie & Lockhead of London and Glasgow.

Government agencies within the High Commission include Austrade, Defence, Materiel (CONDMAT), National Library of Australia and Public Affairs/Media/Cultural. The building's grand interior was used as the setting of Gringotts Wizarding Bank in Harry Potter and the Philosopher's Stone.

All content from Kiddle encyclopedia articles (including the article images and facts) can be freely used under Attribution-ShareAlike license, unless stated otherwise. Cite this article:
High Commission of Australia, London Facts for Kids. Kiddle Encyclopedia.