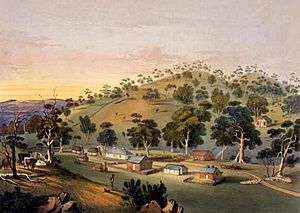 Angaston painted by George French Angas in the 1840s

Angaston is a town on the eastern side of the Barossa Valley in South Australia, 77 km northeast of Adelaide. Its elevation is 347 m, one of the highest points in the valley, and has an average rainfall of 561  mm. Angaston was originally known as German Pass, but later was named after George Fife Angas, who settled in the area in the 1850s. Angaston is in the Barossa Council local government area, the state electoral district of Schubert and the federal Division of Barker.

The finish of the 135 km, first stage of the 2014 Tour Down Under occurred on 21 January 2014 within the town. The race started in Nuriootpa and was won by Simon Gerrans of Orica-GreenEDGE.

All content from Kiddle encyclopedia articles (including the article images and facts) can be freely used under Attribution-ShareAlike license, unless stated otherwise. Cite this article:
Angaston, South Australia Facts for Kids. Kiddle Encyclopedia.