Light Pass is a settlement in the Barossa Valley region of South Australia. It was named by Charles Flaxman in honour of William Light. Light Pass is the site of two Lutheran churches and a public primary school. 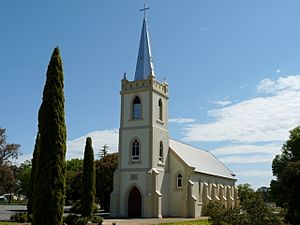 Light Pass was previously served by the Light Pass railway station on the Barossa Valley railway line, previously known as the Minkie station, derived from an Aboriginal word for daylight. The station was near the intersection of Penrice and Light Pass Roads, slightly south of the town.

All content from Kiddle encyclopedia articles (including the article images and facts) can be freely used under Attribution-ShareAlike license, unless stated otherwise. Cite this article:
Light Pass, South Australia Facts for Kids. Kiddle Encyclopedia.