Kids Encyclopedia Facts
Not to be confused with High Cross, Constantine. 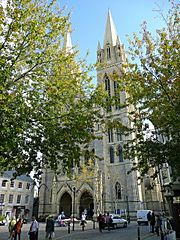 High Cross is the name of a cobbled plaza in Truro, Cornwall, England, UK, in front of the west face of Truro Cathedral. It is at the junction of Pydar Street, King Street, and St Mary's Street.

The plaza is extensively dotted with floral hanging baskets during the summer and is the site of Truro's Christmas tree during the festive season.

One building on High Cross has certain significance; the Georgian Assembly Rooms building, a Warrens Bakery store until March 2020, was built in 1789 and was the centre of Truro's high society, containing the Old Assembly Halls and also a theater. There are two busts above the first floor windows, one of the actor and theatrical producer David Garrick, and the other of William Shakespeare.

The cobbles in High Cross were concreted over when Queen Elizabeth II visited the city in the 1970s, and they were restored afterwards.

A multi-storey car park nearby has the name "High Cross". The area has also been noted for its high number of anti-social behaviour incidents.

All content from Kiddle encyclopedia articles (including the article images and facts) can be freely used under Attribution-ShareAlike license, unless stated otherwise. Cite this article:
High Cross, Truro Facts for Kids. Kiddle Encyclopedia.