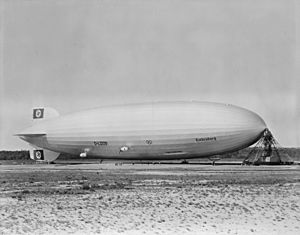 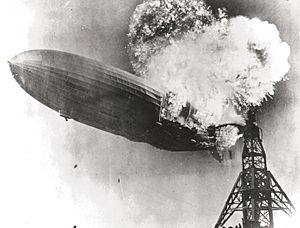 The LZ 129 Hindenburg was a large German airship, built in 1936. It was named in honor of the German field marshal and statesman Paul von Hindenburg. Such airships are called Zeppelin. Along with another Zeppelin, LZ 130 Graf Zeppelin, it was the biggest airship in the world at the time it was built.

On May 6, 1937, the Hindenburg was landing in New Jersey after a transatlantic flight, when it burst into flames. 36 people died and many were injured. The Hindenburg was destroyed by the burning of the hydrogen that was inside it. There are many opinions on what started the fire.

The rock group Led Zeppelin used a picture of the fire for the cover of their self-titled debut album.