The sport of soccer (association football) has had a long history in the Newcastle, New South Wales and the wider Hunter Region. The area has had a number of teams involved in national competitions from 1978 through to the present day, being represented by the Newcastle Jets in the A-League.

Previous NSL clubs have included Newcastle KB United, Adamstown Rosebuds (as Newcastle Rosebud United) and the Newcastle Breakers. In 2000 Newcastle United were formed who survived the end of the NSL in 2004 and currently play in the A-League competition.

In 1951 a group of immigrants from different backgrounds from the Greta camp came together to form a soccer team.

"And so the Austral club were born. Originally accepted into the north NSW second division, the club eventually rose to prominence. They won their first northern NSW first division grand final in 1966 and followed suit in 1969. Continuing to thrive throughout the seventies and eighties, Austral searched for higher-ranked company. In 1988 Newcastle Austral entered the NSW state league first division, reaching the semi finals at their first attempt!"

The first Newcastle-based team to play in a national league was Newcastle KB United which was formed in 1978, one year after the inception of the National Soccer League (NSL). KB United had a strong following in their initial seasons with a crowd of over 15,000 attending the first home game at the International Sports Centre on March 5, 1978 with fans turning out to see a 4-1 loss to Hakoah Eastern Suburbs During the first seasons crowds were good including a record crowd of over 18,000 in 1979 with season averages around 10,000. English star Bobby Charlton and local prodigy Craig Johnston both played at least one game for KB United.

KB United were generally a mid to low table team although they did have some success in the national cup competition in 1984, travelling to Melbourne to defeat Melbourne Knights 1-0 to claim their only piece of silverware.

Due to an unspectacular team performance and increasing financial turmoil KB United's NSL licence was taken over in April 1984 by Adamstown Rosebuds who renamed themselves Newcastle Rosebud United while they played in the NSL. The Rosebuds could not return to prominence in the National League and were subsequently relegated in 1986.

The licence was then taken over in 1987 by an organisation who named themselves Newcastle Football Ltd. They played in the NSW State League after Newcastle Rosebuds were relegated from the Northern Conference of the National Soccer League. 1988 saw the move to the Newcastle Australs. As Newcastle Australs, they also played in the NSW State League until 1991. Five years without a national representative, the Newcastle Breakers were then formed out of that NSW state league club Newcastle Australs. The Breakers played home games at Breakers Stadium in Birmingham Gardens, a suburb in the far west of the city. Since the Breakers' demise in 2000 the stadium was left dormant until 2005 when it was redeveloped into a greyhound racing facility. Aside from the main grandstand and lighting fixtures all infrastructure from the Breakers has been removed.

Newcastle United was formed in 2000 by Cypriot-Australian businessman Con Constantine from the remnants of the Newcastle Breakers club. The Breakers was dissolved when Soccer Australia revoked its NSL licence at the conclusion of the 1999/2000 season. At the formation of Newcastle United the home ground was moved back to where Newcastle KB United played, now known as EnergyAustralia Stadium.

The name "Jets" is a reference to RAAF Base Williamtown, located just 20 kilometres north of Newcastle. The club's logo depicts three F/A-18 Hornets, which the Royal Australian Air Force has based at Williamtown. 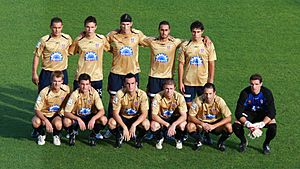 Following the demise of the NSL in 2003-04 the Jets underwent a major overhaul. With all player contracts null and void following the end of the NSL each club had to recruit from scratch. Newcastle assembled an impressive squad with players such as Jade North, Nick Carle and notably, former Socceroo star Ned Zelic who became the inaugural captain. Englishman Richard Money was appointed coash with Gary van Egmond (former assistant to Ian Crook) his assistant. Rumour about the appointment of former England and Australia manager Terry Venables proved unfounded.

After the first regular season the Jets finished in 4th place and lost a two legged playoff with eventual runners up Central Coast Mariners. Following this, coach Richard Money left the club and was replaced by former NSL coach Nick Theodorakopoulos. Ned Zelic left the club but was replaced with players like Joel Griffiths, Paul Okon and Colombian Milton Rodriguez. Due to a poor start to the season Theodorakopoulos was sacked and his assistant van Egmond took over. The club saw a vast improvement over the rest of the regular season and finished third. Upon defeating Sydney FC in the minor semi-final the Jets then went on to lose the preliminary final to Adelaide United on penalties following a 1-1 draw.

Season three saw Okon retire and Rodriguez, and Carle leave leaving the Jets with a depleted squad. Con Constantine brought in former European Golden Boot winner Mario Jardel but he was clearly well past his prime and did not last the season out. Nevertheless with a number of young players the Jets finished 2nd on goal difference after the regular season and were eventually crowned Champions after defeating now arch rivals Central Coast Mariners 1-0 in the Grand Final. A first for a Newcastle football team. In season 2008-09 the Jets will represent the A-League in the AFC Asian Champions League.

All content from Kiddle encyclopedia articles (including the article images and facts) can be freely used under Attribution-ShareAlike license, unless stated otherwise. Cite this article:
History of soccer in Newcastle, New South Wales Facts for Kids. Kiddle Encyclopedia.