A walk around the headland can be accessed through a gate next to the Principal Keeper's House. There are stiles and bridges, which allow access to the unfenced off promontory of Holborn Head itself. There are clear views over to Dunnet Head and to the Orkney Islands. 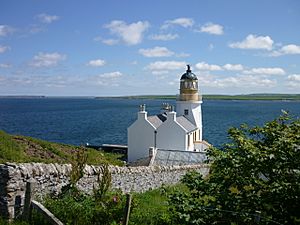 Holburn Head Lighthouse, spelt 'Holburn', unlike the headland which is Holborn Head, is about one kilometre (half a mile) south of the point, near Scrabster Harbour on the western shore of Thurso Bay, at 58°36′54″N 03°32′24″W﻿ / ﻿58.61500°N 3.54000°W﻿ / 58.61500; -3.54000. Designed and built by David and Thomas Stevenson, it was completed in 1862. The tower for the light is integral with the keepers' house which is unusual since most Scottish lighthouses are separate from the house. After entering the upper floor front doorway there is a vestibule with 2 entrances, one to the Lightkeepers House and the other to the Lighthouse Tower. There were 2 Lightkeepers houses and the Tower within the building. Separate to this was the Principal Keeper's House.

The light was discontinued in 2003.

All content from Kiddle encyclopedia articles (including the article images and facts) can be freely used under Attribution-ShareAlike license, unless stated otherwise. Cite this article:
Holborn Head Facts for Kids. Kiddle Encyclopedia.