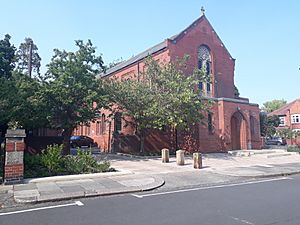 The Holy Name is a parish of the Roman Catholic Church located in the Jesmond suburb in Newcastle upon Tyne.

On 1 December 1901, the parish was founded. The a place of worship was established in a leased house at 68 Manor House Road. On 18 January 1903, a temporary iron church was opened on St George's Terrace. It served as the main chapel for almost 27 years. In 1922, a parish hall called "Osborne Hall" was built. Osborne Hall is now part of the Jesmond swimming baths. A new church was planned and construction began on June 24, 1928.

By 1929, Holy Name Church, with a capacity for 400 people, was built. It is located at the junction of Mitchell Avenue and North Jesmond Avenue. It has several stained windows in different artistic styles. Behind the sanctuary, there are four panels containing large pictures of saints. The saints in the panels are, from left to right, St Thomas Beckett, St Thomas More, St Margaret Clitheroe, St Gabriel, St Michael, St Margaret of Scotland, St John Fisher, and St Cuthbert holding the head of St Oswald.

The Holy Name parish belongs to the deanery of St Andrew and St Anthony, in the Episcopal area of Newcastle and North Tyneside, and is part of the Diocese of Hexham and Newcastle.

To the north of the parish is St Charles's parish (South Gosforth), to the south is St Dominic's parish (Byker), to the east is Jesmond Dene, and on the west with the Town Moor. Originally, Holy Name parish included the district of Benton to the east which is now St Aidan's parish. Currently, the Holy Name serves about 200 active parishioners who attend religious services mainly during the weekends.

All content from Kiddle encyclopedia articles (including the article images and facts) can be freely used under Attribution-ShareAlike license, unless stated otherwise. Cite this article:
Holy Name parish, Jesmond Facts for Kids. Kiddle Encyclopedia.