Horace William Petherick (1839-1919) was an artist and illustrator, a violin connoisseur, and a writer. As an artist, four of his works are in public collections in the UK; as an illustrator, he illustrated over 100 books, some of which are still in print, and his work can be found in digital collections at the British Library, the Osborne Collection of Early Children's Books, and the Baldwin Library of Historical Children's Literature; as a violin connoisseur, he owned both a Stradivarius and a del Gesù; and as an author, three of his books are still in print.

Petherick was born on 4 December 1838. Very little is known about his early life. He was the third of eight children to tailor William Richard Petherick and Phoebe Mary Ann, née Cooper who had married in St Pancras on 12 April 1835. Two of Horace's siblings died in early childhood, and he was to suffer with his own children as two of his seven died in early life.

Horace was registered on the 1861 census as an artist. He married Clementina Augusta Bewley Bonny (c.1860-1909) and the couple immediately moved to Addiscombe, Surrey, where they remained for the rest of their lives. Very little is known about his early life. The couple had seven children, two of whom died in infancy, leaving five girls, of whome one, Rosa Clementina (1872-1931) became an illustrator like her father.

The Annual Review noted on his passing that he was an artist of repute who exhibited at the Royal Academy on several occasions. Petherick exhibited to a limited extent. Four of his works are in public art collections in the UK.

Work as an illustrator 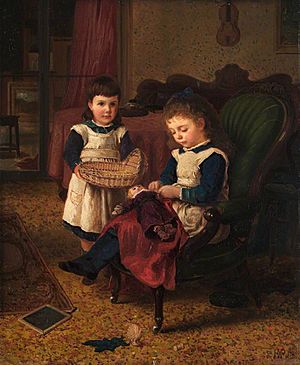 His first work as an illustrator was in 1868, but it was only in the early 1870s that he started to attract large amounts of work. He illustrated well over 100 books in his career. He illustrated many young children's books, but he also did a few books for young adults. He was one of the illustrators for The Savage Club Papers (1897). He acted as technical illustrator for his own books on the violin. From about 1890, he seems to have done less illustration work, and none at all from 1900, except of his own violin books, and violins provided a second career for him.

Writers he illustrated for included:

This is an example of his illustrations for a book for young adults.

Most book illustrations of the time were in black and white drawings for books for adults or young adults. Colour was only used for books for small children or for the frontispieces of other books. Houfe states that he specialised in children's stories, especially those with figures in costume. Petherick worked on several full colour books, including London Characters (1875) by Laura Valentine which showed 36 different occupations in London. Twenty-nine of the 11 x 7 cm vignettes on which the book was based were sold for £1,200 in 2007.

Illustrations by Horace William Petherick for the book My Dog Tray in c.1880

This is an example of his coloured illustration for young children.

Work by Petherick can be found in the digital collections at:

Petherick was a violinist in 1908 Petherick stated in evidence the he owned 12 violins made by del Gesù. What is certain is that owned at least two first quality violins:

It is not clear when Petherick moved from being an illustrator to being a violin expert. In the title page of his 1900 book on Antonio Stradivari he lists that he was:

He was already contributing to Strad on the topics of stringed instruments and even wrote several serial books for Strad that they later published as part of the Strad Library. In 1882 he even had a series of five articles in the Boy's Own Paper on How to Make a Violin. These were published on 21 October, 28 October, 4 November, 11 November, and with the last part on 18 November 1882.

His books for the Strad Library were published by The Strad in the UK and by Charles Scribner's Sons in the us. The titles included:

The first three of these books are still in print, as are some of the children's books that he illustrated.

Status as a violin expert

Certifying the origins of violins

Not a lot is known about Petherick's work as an expert witness. The title pages of his books state that he was an Expert in the Law Courts from 1891. He frequently provided certificates of authenticity for violins, and appeared to give expert evidence on the origin of stringed instruments. Such certificates helped to reassure buyers that they were not being cheated. Petherick provided certificates for several violins including:

Bartholomeo Giuseppe Guarneri was a luthier from the Guarneri Family of Cremona. He was known not only by a mix on anglicised and Latin forms of his name but also by the soubriquet of del Gesù (of Jesus) because he began to add a religious symbol after his name 1739. On 4 May 1906, the member of the Cremona Society were told that there would be a special meeting on 30 May, at which a paper dealing with the discovery of the only known cello by del Gesù would be read by Petherick and that the renowned cellist and teacher Herbert Walenn would play the instrument.

Petherick read his paper, the Cello was exhibited, and played. The August edition of The Strad reproduced a photograph of the front and back of the cello, and printed a series of documents dated 28 April 1906:

In his book, Petherick claimed that Andrea Gisalberti of Parma was del Gesù's master, and the certificate referred to this. In their 1916 book, Hidalgo and Piper said that Andrea was a little-known maker of no great account and that neither Mr Petherick's arguments, nor the examples by which he strove to support them were seriously accepted by most judges of the first rank. 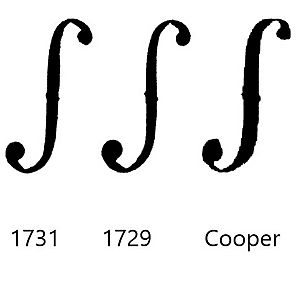 The f-holes of the two cellos believed to have been finished by del Gesù alongside the f-hole of the cello produced by Cooper and certified by Petherick.

However, before The Strad could report on the meeting, Truth, a weekly known for exposing frauds of all kinds, ran a series of columns on the cello and on the Cremona Society:

In The Strad's September 1906 edition there was a note from the editor of that: "At a recent committee meeting of the Cremona Society it was decided that on one connected with the trade should be a member of the committee or an officer of the society."

The Australian Chamber Orchestra states that to this day there are only two cellos known to have been completed by del Gesù. Only two cellos are listed in the Cosio Archive of musical instruments at Tarisio.com as having been, at least in part, the work of del Gesù. In both cases he is thought to have finished cellos that had been begun by his father. These are:

The provenance of neither of these, as presented in the Cozio archive, allows for discovery in London in 1906. The photographs published at the time show that the cello introduced by Cooper had significantly narrower and rounder wings (the tangs that form the inside of the scrolls at the top and bottom of the f-holes) than can be seen in photographs of the two cellos listed in the Cozio archive.

In the first of these cases, in 1907, the dealer Joseph Chanot relied on Petherick's certification of two violincellos to defend himself from an action by the purchaser. However, the court instead accepted the view of the expert from W.E. Hill & Sons and found against Chanot. The Hills were the recognised authories on violins in the UK. Moya and Piper called the 1902 (with a 2nd edition in 1909), book by the Hills brothers on Antonio Stradivari the most exhaustive critical survey of the subject which has yet appeared. Their volume on the Guarneri family, in which, among other things, they described their discovery of del Gesù's baptismal records, establishing his birth 21 August 1698, rather than the established fact that he was born in 1683 according to Petherick, or the date of October 1987 given by Moya and Piper.

In the second case, in April 1908, Dr. Hitchcock had bought a violin, certified by Petherick to be the work of Petrus Guarnerius, for £100. However, he found that the violin was not as represented and took the seller to court to recover his money. Alfred Hill of W. E. Hill & Sons gave evidence that the violin was in fact French. Petherick still maintained that it was by Guarnerius, but made no serious effort to rebut Hills testimony. The Defence argues that they gave no guarantee, but the jury found against them and awarded damage to Dr Hitchcock. Truth noted that Vincent J. Cooper bought the violin for £2 10s initially and sold it to the defendants for £25, who in turn sold it on to Hitchcock for £100. presumable to add fictious [sic?] important to an otherwise worthless document.

In the third case, in June 1908, Mr. English sued Vincent F. Cooper for fraud, alleging that he had sold English a violin claiming that it was by del Gesù. Cooper had certified the origin of the violin himself, even giving it the supposedly tradition nickname of giant. Petherick appeared in court to support the contention that it was by del Gesù and J. W. Hills & Sons maintained that it was not. However, the jury found against Cooper and awarded damages to English.

Chevalet's assessment was that this last trial should dispose once and for all of Mr Cooper's firm and of the self-styled expert Peterick. No further references to certificates by Petherick appear in The Strad. A slim volume dated 1910, announcing the retirement of Balfour and Co. as Antique Italian Violin Transfer Agents and Experts was offered for sale by Cambridge Books of Maine in February 2020.

Petherick's wife died in March 1909 and ten year's later Petherick himself, at 80 years of age, died at his home in Addiscombe. He left an estate valued at £1,940, with probate granted to his daughter Rosa. The five daughters who had survived infancy all survived their father, but by only another five years in Ada's case.

Includes both books written by him and books illustrated by him.

All content from Kiddle encyclopedia articles (including the article images and facts) can be freely used under Attribution-ShareAlike license, unless stated otherwise. Cite this article:
Horace William Petherick Facts for Kids. Kiddle Encyclopedia.