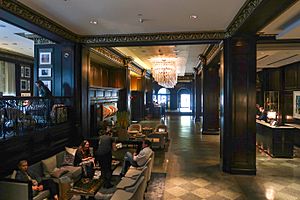 It was opened on May 7, 1927. The architects were Robert T. Garrow and John Graham, Sr.

Sold in early 2007 by owner Allied Hotel Properties Inc, the hotel, then operating as the Crowne Plaza Hotel Georgia underwent restoration and was unveiled on July 15, 2011 as Rosewood Hotel Georgia, managed by Rosewood Hotels & Resorts. In the process of the renovation, its 313 rooms were reduced to 155. The building and many portions of the interior are designated as a protected heritage property by the City of Vancouver. The interior design for the renovation was by Toronto-based design firm, Munge Leung. It is a registered cultural heritage site in Canada, with the number 11158 in the Canadian Register of Historic Places. 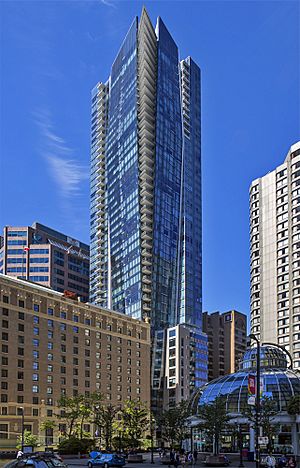 The Private Residences at Hotel Georgia

A 48-story, 158.5 metre, high-rise residential building has been constructed on the adjoining site of the hotel's parking structure. It is the 3rd tallest tower in the city, after the Living Shangri-La Tower and the Trump International Hotel and Tower. All three of these developments are new mixed use hotel/residences towers on Georgia Street. 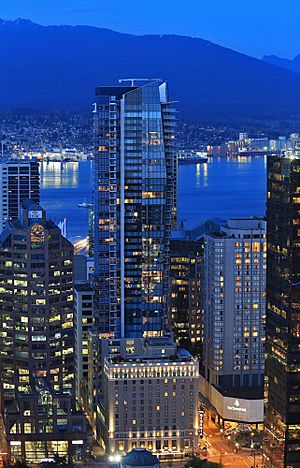 All content from Kiddle encyclopedia articles (including the article images and facts) can be freely used under Attribution-ShareAlike license, unless stated otherwise. Cite this article:
Hotel Georgia (Vancouver) Facts for Kids. Kiddle Encyclopedia.