The Hotel Jerome is located on East Main Street (State Highway 82) in Aspen, Colorado, United States. It is a brick structure built in the 1880s that is often described as one of the city's major landmarks, its "crown jewel". In 1986 it was listed on the National Register of Historic Places. It is operated by Auberge Resorts.

It was built by Jerome B. Wheeler, at the time co-owner of Macy's and a major investor in Aspen during its early boom years. He wanted the city to have a hotel that equaled European ones in its refinements and amenities. It was one of the first buildings west of the Mississippi to have full electric lighting and it has the only above ground ballroom in Aspen. It was the only hotel to remain open through the city's "quiet years" in the early 20th century, as a family business run by a former bartender and his son that often served as the town's social center.

During Prohibition a celebrated spiked drink, the Aspen Crud, was invented at its J-Bar. Later, the drink and bar became popular with members of the Tenth Mountain Division while they trained in the area. After the war, Aspen and its new ski resort became a popular destination, and celebrities vacationing in Aspen like Gary Cooper and John Wayne often stayed at the Jerome, and it became known as a place where they and the locals freely mingled. Hunter S. Thompson used the J-Bar as his de facto office; later the hotel ballroom hosted his memorial service. Bill Murray partied there while portraying Thompson in a film, and the J-Bar also inspired a song by Glenn Frey, who had gone there often with his bandmates while a member of The Eagles.

The Jerome occupies a 1.1-acre (4,500 m2) lot on the northwest corner of the North Mill Street intersection. The neighborhood is densely developed with many other commercial properties. Some of them, such as the Pitkin County Courthouse two blocks to the east, Aspen City Hall to the southeast, Collins Block and Wheeler Opera House to the south along Mill Street, have been listed on the Register themselves. At the opposite end of the block, across the street, is the Thomas Hynes House, a former miner's cottage now used as a restaurant and also on the Register. To the north the terrain, level between the hotel and the slopes of Aspen Mountain, begins to slope gently toward the Roaring Fork River, which flows through Rio Grande Park two blocks to the north.

The building itself is a three-story 12-by-11-bay brick structure, with a small hyphen connecting the main block to a north wing of similar shape and size. Both are topped by a flat roof. The slight grade to the north exposes their basements slightly. 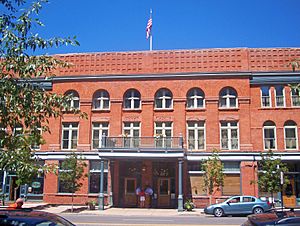 Its south (front) facade has a wooden hood, topped with a balcony balustraded in turned wooden spindles and supported by narrow iron columns, covering the sidewalk at the centrally located recessed main entrance. It is flanked by two small aspen trees on either side at the street. Smooth round columns on square bases support a molded cornice with metal letters spelling "Hotel Jerome" on the east and west.

The middle six bays of the facade project slightly, separated by pilasters with foliated caps, forming a tall arcade. On either side of the front entrance are large windows with a small rectangular pane atop a larger one. All have sills of locally quarried rough cut peachblow sandstone, which continues around the building as a stringcourse and water table. Sandstone also forms a frieze, interrupted by the windows, below the molded tin cornice. At the ends of the facade are wood and glass storefronts, housing two of the hotel's three restaurants, the J-Bar on the west and Library on the east.

Windows on the second story's central projection are one-over-one double-hung sash windows with transoms and sandstone sills and lintels. In the middle two the words "Hotel" and "Jerome" are carved. They are recessed slightly between brick pilasters with sandstone bases and capitals with decorative carvings. On the flanks the windows are set in round segmental arches laid with several rows of splayed brick and topped with brick voussoirs. They, too have sandstone sills and a sandstone course runs around the building at the arches' springline.

At the third story the four-pane center windows, also recessed, have a similar round-arched treatment as the flanking second-story windows. On the sides are four one-over-one sash windows with sandstone sills and small decorations between them. At the lintel is a dentilled, fluted wooden frieze that continues around the entire building save the front portico. Above it is ridged metal convex cornice that marks the roofline. It is topped by a parapet with four rows of recessed square panels. A flagpole is located in the center of the roof at the front.

The east face has a similar, more restrained treatment, with the sandstone trim, stringcourses, cornices, and fenestration. On the west side, there is little decoration other than the segmental splayed-brick arches on the windows. The brick annex on the north side is non-contributing as it was not part of the original building. 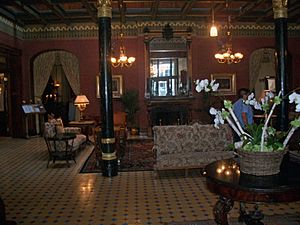 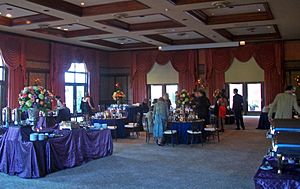 Inside many original finishes remain. The lobby has been restored to its original appearance. From the lobby hallways lead to the Garden Terrace restaurant in a western annex, with an adjacent outdoor terrace south of the swimming pool. The first floor is also home to several meeting spaces, including the 3,450-square-foot (321 m2) Grand Ballroom in the northeast corner of the rear block, the only above ground ballroom in Aspen, with 16-foot (4.9 m) ceilings.

On the upper floors there are 94 guest rooms. They range from 500 to 750 square feet (46 to 70 m2) in size, from single rooms to suites. Standard amenities include marble vanities in the bathrooms, high-speed Internet access, a DVD player, fully stocked mini-bar and beds with 300-thread count linens. Their configuration has changed considerably from their original layout.

All content from Kiddle encyclopedia articles (including the article images and facts) can be freely used under Attribution-ShareAlike license, unless stated otherwise. Cite this article:
Hotel Jerome Facts for Kids. Kiddle Encyclopedia.