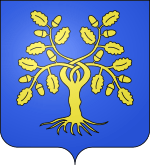 Coat of arms of the Rovere. The name means of the oak tree.

The House of La Rovere (or Della Rovere) is a noble family of Urbino in central Italy. They originally came from Savona, Liguria. The family rose to nobility through nepotism and ambitious marriages. These marriages were arranged by two Della Rovere popes, Francesco della Rovere (Pope Sixtus IV, 1471–1484) and his nephew Giuliano (Pope Julius II, 1503–1513). Pope Sixtus IV is known for having built the Sistine Chapel, which is named for him. The Basilica San Pietro in Vincoli in Rome is the family church of the della Rovere. Vittoria della Rovere was a member of the family and was one of the last Grand Duchesses of Tuscany.

All content from Kiddle encyclopedia articles (including the article images and facts) can be freely used under Attribution-ShareAlike license, unless stated otherwise. Cite this article:
House of La Rovere Facts for Kids. Kiddle Encyclopedia.