She gave her husband four children, two of which would survive infancy the future Cosimo III and Francesco Maria de' Medici, Duke of Rovere and Montefeltro. She was the Duchess of Rovere and Montefeltro in her own right and these went to her youngest son when she died. She was later the guardian of her three grandchildren. Her marriage bought a lot of art treasures to the House of Medici which are today at the Palazzo Pitti Uffizi Gallery in Florence. She did not get on with her daughter in law Marguerite Louise d'Orléans.

She was the daughter of Claudia de' Medici. She was distantly related to her husband. 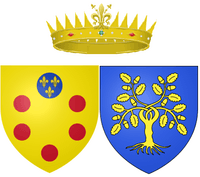 Arms of Rovere as Grand Duchess of Tuscany

All content from Kiddle encyclopedia articles (including the article images and facts) can be freely used under Attribution-ShareAlike license, unless stated otherwise. Cite this article:
Vittoria della Rovere Facts for Kids. Kiddle Encyclopedia.