Howe was settled in 1834. At that time, it was named Mongoquinong, a name that the Potawatomi Indians had given to the prairie in northeastern Indiana. Shortly thereafter it was renamed Lima and was, at that time, the county seat. It was later renamed Howe after John B. Howe, a local attorney.

The Howe Military School, the town's most famous attraction, was founded in 1884. 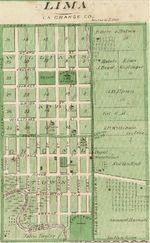 Local Places on the National Register

Sites in Howe on the National Register of Historic Places are:

All content from Kiddle encyclopedia articles (including the article images and facts) can be freely used under Attribution-ShareAlike license, unless stated otherwise. Cite this article:
Howe, Indiana Facts for Kids. Kiddle Encyclopedia.