Howe Island measures 13 km (8 mi) long and 5 km (3 mi) wide and has an area of 31 km² (12 mi²). The main channel of the St. Lawrence River passes to the south of the island, while the Bateau Channel passes on the north between the Canadian mainland and the island. 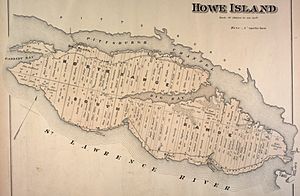 Howe Island was originally named Ka-ou-enesegoan by local Iroquois and later Isle Cauchois after its first French owner Jacques Cauchois who took possession in 1685. In a proclamation by the Lieutenant Governor of Upper Canada John Graves Simcoe on 16 July 1792, the island was renamed from isle Cauchois to Howe island.; it was named for William Howe, 5th Viscount Howe, a British officer who served under General James Wolfe at the Battle of the Plains of Abraham during the Seven Years' War, and first appeared on a map in 1818 following a survey by Captain (later Vice Admiral) William Fitzwilliam Owen of the Royal Navy. There is some evidence (received by oral tradition) that it was at one time also called St. John's. There is no evidence of any permanent habitation until 1810 by a man named William Casey. In the following four decades successive waves of settlers brought many of the island's long standing families who still live or own land there.

Howe Island has a shared community of farming, as well as "cottagers". The Island also has a small Roman Catholic Church- St. Philomena's.

The population of Howe Island in 2011 was 602, although this figure expands in the summer months when recreational properties are occupied.

Two ferry services connect the island to the mainland: a County-operated ferry on the west from the community of Pitts Ferry, part of Kingston; and the Township-operated "Foot Ferry" on the east from Gananoque.

All content from Kiddle encyclopedia articles (including the article images and facts) can be freely used under Attribution-ShareAlike license, unless stated otherwise. Cite this article:
Howe Island Facts for Kids. Kiddle Encyclopedia.